Adjustable Loans Form Largest Share of US Mortgages Since 2008 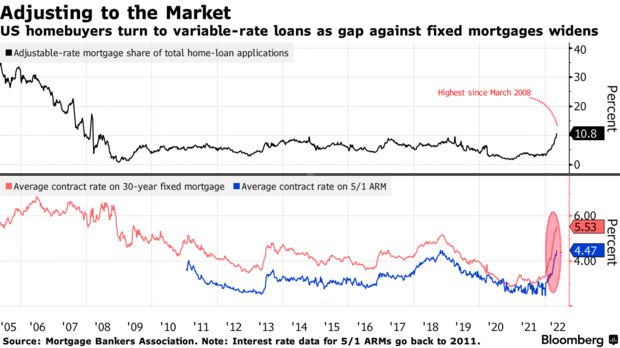 US homebuyers are increasingly turning to adjustable-rate mortgages as overall borrowing costs soar.

ARMs — which carry variable interest rates that reset based on the market at predetermined times — accounted for 10.8% of total home-loan applications in the week ended May 6, data from the Mortgage Bankers Association showed Wednesday. That’s up from 3.1% of activity at the start of the year and is the largest share since 2008.

That’s made 5/1 ARMs, averaging 4.47%, look comparatively cheap for borrowers trying to lower their monthly payments. Such mortgages have a fixed interest rate for the first five years before resetting annually for the remaining life of the loan. Borrowers risk the potential of higher payments in the future in return for lower introductory rates.

The ARM share of total applications peaked in March 2005 at 36.6% — during the housing bubble that would pop soon thereafter — but has held in the single digits in recent years as borrowers have sought to lock in historically low rates.