After a Two-Year Dip, Evictions Accelerate in New York 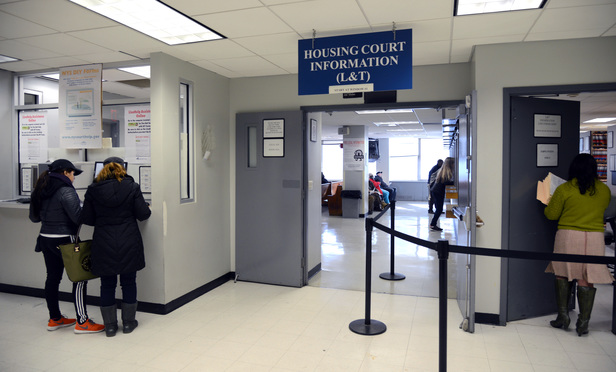 In New York, where landlords typically move to evict more people than in any other city in the nation, the housing courts sat in an unusual stupor for some two years. But as pandemic restrictions ease, they are beginning to hum anew.

The roughly 2,000 eviction cases filed by landlords every week since March are roughly 40 percent more than the number filed in mid-January, after the state’s eviction moratorium expired. Tenants have been thrown out of homes in more than 500 cases since February, according to city data, about double the number in all of the 20 months prior.

Judges are increasingly asking tenants to appear in court after months of remote interactions. Lawyers representing landlords are exasperated cases are not moving faster, while lawyers who defend tenants cannot keep up with a rising caseload.

The courts bear little resemblance to the frenetic, prepandemic past, when lines of beleaguered tenants spilled around the block and crowded hallways featured raucous settlement talks.

The number of cases is still below prepandemic levels.

On a recent Thursday, the pews in a Brooklyn courtroom sat mostly empty, with only a few lawyers mingling in deserted hallways as tenants queued in a cramped waiting area at what was once one of the city’s busiest courts.

But after the pandemic pushed thousands of people to the brink of losing their homes, the uptick in activity is raising questions about how well the housing system can continue to avoid a wider crisis of dislocation, as soaring rents once again underscore the city’s challenges with affordability, and whether some of the ugliest features of the city’s longstanding housing crisis, such as the chaotic court system, are set to return.

Already, a new, crucial protection — a service for free legal representation — is reaching a breaking point, advocates for tenants say.

For years, nearly all landlords used lawyers in housing court, while the majority of tenants did not — a power imbalance that many felt unfairly left tenants vulnerable to eviction. A new city law was passed in 2017 to provide free lawyers for low-income people, and went into full effect last year.

But several nonprofits tapped by the city to represent tenants, grappling with staffing shortages and the uptick in cases, say they are not ready to meet the need. A court spokesman said last week that legal groups had declined to take on nearly 1,400 cases since March.

In Brooklyn, for example, Legal Services NYC has had about 25 lawyers handling cases through the program since 2019. But compared with February and March that year, the number of cases in those months this year doubled to more than 300, the group said.

Several lawyers have resigned, and the group has struggled to hire and train enough new lawyers amid a tight job market, said Raun J. Rasmussen, the group’s executive director.

“Right now we’re trying really hard to grab every single May law graduate who doesn’t have a job, and we’re all competing with each other to do that,” he said.

“The fear today is that we’re going to have a lot of tenants going without full representation from counsel at a time when we’re trying to come out of the pandemic,” said Adriene Holder, chief attorney of civil practice at the Legal Aid Society.

The groups have called on the courts to slow the scheduling and pace of cases moving through the system.

The spokesman for the courts, Lucian Chalfen, said last week that the number of scheduled appearances in cases was down 41 percent compared with the first quarter in 2019, and the number of new cases filed was down 62 percent.

He said that a slowdown would “accomplish nothing,” as new cases would continue to pile up.

“Are the legal services providers really all of a sudden going to have an epiphany and be able to provide representation on all of those cases?” he said.

The new city law was meant to help tenants like Damian Winns, a security guard, who moved into a one-bedroom apartment in East New York just before the pandemic. At $1,200 a month, it was one of the few places he felt he could afford.

But Mr. Winns, 44, struggled to find work during the pandemic, and missed a few months of rent last year. He thought a pandemic rent relief program paid for the missed months.

Instead, Mr. Winns found himself at a hearing in a courthouse in Downtown Brooklyn last week after his landlord moved to evict him, claiming he still owed the money.

“Where else am I supposed to go?” Mr. Winns said in an interview.

Although he may have been eligible for a free lawyer, nobody was there to take his case, and a court official told him a legal group should reach out before his next court hearing this month — maybe.

New York City’s housing courts, located in a handful of buildings and offices across the boroughs, were created by the state almost 50 years ago to enforce the housing code and keep homes from deteriorating. But the bulk of cases have nearly always been eviction proceedings over unpaid rent.

Fifty housing court judges are appointed by New York’s chief administrative judge for five-year terms, based on recommendations made by a panel of representatives from tenant advocates, the real estate industry and the bar association, among others.

New York City has a reputation for being relatively tenant friendly: Eviction cases can take months or longer compared with a few days in other parts of the nation. But the sheer number of cases has prompted criticisms that the court system is overburdened.

Eviction cases in the public housing system, which accounted for tens of thousands of cases every year before the pandemic, have largely been discontinued. The eviction moratorium and a massive rent relief program, which has paid out $1.8 billion to address the rent debt of more than 140,000 households, have also lightened the load of cases.

Still, the court process remains confounding for both landlords and tenants.

At a recent court hearing in Brooklyn, Salvatore Candela, a lawyer representing a landlord of a three-story building in Flatbush, expressed disappointment when a judge set a new hearing date for June to give more time for one of the tenants to find a lawyer.

The landlord, Robinson Cadet, a retired corrections employee, may go another month without a rental income, after he said he was already owed $57,000 over the past year and a half.

“It makes me feel like the whole system is against me,” Mr. Cadet said.

Meanwhile, Sasha Portilla, a taxi dispatcher, appeared in a Queens courtroom earlier this month, after her landlord said she had overstayed the term of her lease and moved to evict her. It was her first time in housing court, she said, and she worried that her eviction could happen within days.

For at least 30 minutes, Ms. Portilla, 32, watched another case unfold virtually on a television screen as a court official struggled to find remote interpreters to translate between a landlord who spoke Mandarin and a tenant who spoke Spanish.

When it was Ms. Portilla’s turn, she asked a court official how soon she could be evicted. A court employee said there were still several steps in the process, and that a pro bono lawyer should, in theory, reach out before her next hearing in May, to help her through the process, but to tell a judge if that did not happen.