Economists Are Optimistic About Recovery From The Delta Variant As The U.S. Economy Picks Up Steam 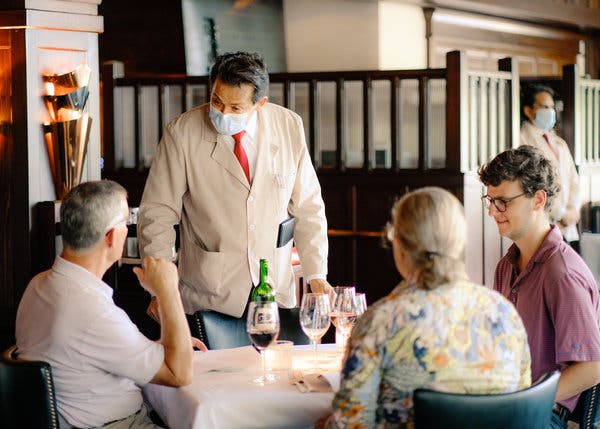 The Delta variant of Covid-19 appeared to temper economic growth this summer, but economists expect the recovery from the pandemic to reaccelerate as the virus’s toll eases.

In recent weeks, many economists lowered their forecasts for third-quarter economic growth in large part because consumers slowed spending on meals out, hotels and airline tickets amid the spread of the highly contagious Delta variant. The Covid-19 surge also complicated office and school reopenings, turning what had been expected to be a September boom into a downturn.

Forecasting firm IHS Markit projected in late September that gross domestic product would grow at a 3.6% annual rate in the third quarter. That is less than half of the firm’s mid-July estimate for 7.8% growth in the third quarter, in part reflecting the spending dent from the Delta strain. The government will release its estimate of third-quarter U.S. gross domestic product on Oct. 28.

“I do think that this new strain has set off some alarm bells that weren’t ringing before July,” said Joel Prakken, chief U.S. economist at IHS Markit. “The recovery is on solid footing. But it’s just not as robust as what we saw in the first half of the year.”

Many economists have raised their growth forecasts for next year, indicating that some spending and production have been delayed by the Delta surge, rather than lost to it and supply-chain disruptions.

There are early signs that the spending slowdown is bottoming out as Covid-19 cases decline. In the week ended Sept. 28, the number of diners seated at restaurants was down just 8% from the same period in 2019, a less severe decline than earlier in the month, data from reservations site OpenTable show.

U.S. hotel occupancy was at 63% for the week ending Sept. 18, the highest level since late August, data from STR, a global hospitality data and analytics company, show. Air travel has shown signs of recovery since hitting a recent trough in mid-September, according to Transportation Security Administration figures comparing passenger traffic with 2019.

Covid-19 cases are likely to continue falling, according to projections from the Centers for Disease Control and Prevention. If they do, households could tap into a record $142 trillion in net worth and ramp up spending on in-person services, economists say. Consumer spending is the biggest driver of U.S. economic growth.

“The consumer is in great shape,” said Aneta Markowska, chief economist at Jefferies LLC. “They have the firepower, they have the ability to spend.”

Ms. Markowska added the holiday season could provide another impetus for spending. More people are likely to travel for family get-togethers than last year, when many stayed home amid rising coronavirus cases, she said. In one sign of robust holiday demand, there were five times as many internet searches related to December travel in August compared with a year earlier, according to digital analytics company Similarweb.

The Federal Reserve raised its 2022 growth forecast to 3.8% in its September projections released last week, up from 3.3% in June projections.

Some economists expect growth to reaccelerate after the third quarter. This month, Allen Sinai, chief global economist and strategist at Decision Economics, Inc., projected output would grow at a 6.5% annual rate in the fourth quarter and at a 5.1% rate in the first quarter of 2022, up from 4.2% in the third.

The economy looks like a coiled spring “that’s being held down in the third quarter by the worsening pandemic,” he said. “But six months from now, one way or the other, as we have seen in the past, we’ll be over that hump.”

Though the U.S. is vulnerable to the fast-changing pandemic and potential new variants, each wave of rising Covid cases appears to pose less of an economic threat.

The economic drag from the Delta variant was less severe than previous virus surges, many economists say. Most American adults are now vaccinated, helping consumers feel more at ease. Further, most businesses are operating without capacity restrictions.

Restaurant and hotel revenue at the 112-year-old Hotel Boulderado in Boulder, Colo., broke above pre-pandemic levels this summer and are now riding 5% to 10% higher than two years ago, said Creighton Smith, the hotel’s general manager. People eager to travel have been drawn to Boulder’s outdoorsy environment, he said.

“There was a lot of pent-up demand for travel for the summer and the fall,” Mr. Smith said.

Delta has triggered a slowdown in winter bookings for corporate meetings, Mr. Smith said. Still, the hotel no longer faces the same business restrictions and consumer fear of the virus that held back sales earlier in the pandemic.

“We’re looking forward to a good fall and, I think, an OK winter,” he said.

Companies in August reported a sharp increase in new orders for appliances, computers, transportation equipment and other durable goods. Businesses have struggled to meet consumers’ demand for goods.