Expect Two Shallow Recessions, Plus a Quick End to the Fed’s Moves to Raise Interest Rates 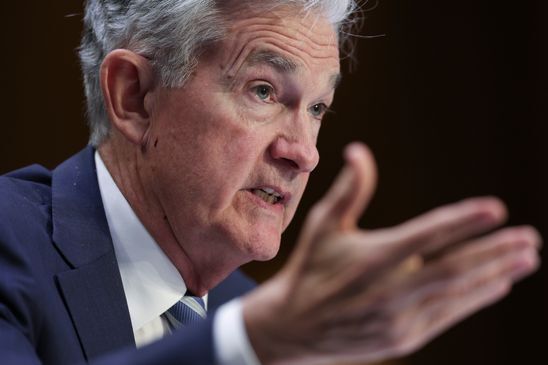 Forward guidance sounds like a great idea. Central bankers should lay out their longer-term goals to influence financial markets. Just as hockey great Wayne Gretzky would skate where the puck was headed, instead of where it was, monetary authorities would try to guide markets where policy was expected to be months ahead. But central bankers are rather less adept than the Great One in determining where the puck is going.

The Federal Reserve effectively has scuttled forward guidance, opting instead for leaks of decisions by its policy-setting Federal Open Market Committee a few days before meetings. Just as well, since there have been erratic zigzags of late.

At his May 4 press conference, Fed Chairman Jerome Powell declared that a 75-basis-point increase in its federal-funds target rate was “not something the committee is actively considering.” At the mid-June FOMC meeting, the rate was raised by 75 basis points, to the present 1.50%-1.75% range; the decision apparently was leaked to The Wall Street Journal a couple of days earlier. (A basis point is 1/100th of a percentage point.)

This past week, the Journal reported that the FOMC is leaning toward another 75-basis-point hike at the two-day meeting that starts Tuesday, rather than the 100-basis-point increase some Fed watchers had predicted after a stunning 9.1% jump in the consumer price index was reported for the latest 12 months, and the Bank of Canada surprisingly decided on a full-point boost. But fed-funds futures Friday pointed to an 81% probability of a 75-basis-point move by Thursday, according to CME’s FedWatch site. On July 13, following the release of that disastrous CPI report, odds of a 100-basis-point hike peaked at 80%.

The big picture that emerges from these sudden shifts is that the investment environment is radically different from what prevailed in 2009 to 2019, in the decade after the 2008-09 financial crisis, observes Gregory Peters, co-chief investment officer of PGIM Fixed Income. And with it, he says, comes “a range of plausible outcomes as vast as any I’ve seen in my career.”

Forecasters and market participants are markedly unsure about the path of Fed policy and the economy, even after the FOMC belatedly lifted its outlook for the year-end fed-funds rate to 3.4% in its June Summary of Economic Projections from just 1.9% in March, an implausibly low number, given surging inflation.

The FOMC largely marked its numbers to the market. The futures market sees fed funds hitting the central bank’s year-end estimate by its Nov. 2 meeting, with one more 25-basis-point hike at the Dec. 14 FOMC confab, bringing the range to 3.50%-3.75%. That could mark the peak, with the market indicating that the Fed will change tack and cut the fed-funds rate by 25 basis points next March.

Such a path suggests a slowing of the economy and an easing of inflation, permitting the Fed to reverse course next year. But some observers think the central bank’s tightening will have to exceed its own estimates and what’s priced into the markets.

Jefferies’ chief financial economist, Aneta Markowska, agrees with the consensus call for a 75-basis-point hike at the coming meeting, but then sees the Fed shifting to a 50-basis-point rise in September, not the 75 basis points baked into the futures. But she says that the market is underestimating the eventual peak for the funds rate, which she expects to hit 4%.

Markowska sees central banks setting policy based on reported data, rather than their own forecasts (which have been far off the mark). She also sees the numbers coming in sunny side up for a while, the opposite of the stagflationary slog most investors and consumers feel.

For starters, she notes, nominal growth has been super strong, resulting in robust spending in current dollars, although much of that can be chalked up to inflation. With gasoline prices off sharply in recent weeks, she looks for a string of benign CPI reports with headline monthly changes of nearly zero.

But that could mask the continued upward price pressure on “core measures” of inflation, which exclude food and energy, as hypothesized in this space a week ago. Once energy prices stop falling, the realization of the stickiness of core inflation will catalyze the markets to reprice their expectations for Fed policy, she predicts.

And, says PGIM’s Peters, inflation mathematically will be rolling over quickly from the recent 9% year-over-year rate to 7% or 6%. But what if it is stuck at 4% or 5%? “Is the central bank’s job done? It’s entirely too optimistic that will be enough to contain inflation,” he contends.

Like Markowska, Peters sees strong nominal economic growth, which he says is underrecognized. The good news is that this will bolster reported corporate earnings, papering over a lot of problems, even if the gains mainly represent inflation.

Markowska sees a recession as next year’s worry. She dismisses the recent rise in new unemployment-insurance claims. State data show much of it concentrated in Massachusetts, she observes, anecdotally in biotech and tech companies squeezed by tighter financial conditions. Continuing claims haven’t risen, suggesting to her that those laid off are finding new jobs quickly in a strong labor market.

Peters thinks the Fed will stay the course to bring down inflation and regain its credibility. Easing at the first sign of weakness would be like quitting a marathon with just a few miles to go. From an investment standpoint, he’s wary of corporate credit risk because of the possibility of a recession, and prefers longer-duration Treasuries, which should benefit from the Fed’s inflation fight.

Fed chief Powell insists that the central bank will bring four-decade-high inflation back to its 2% target. On that point, Société Générale’s ever-acerbic global strategist, Albert Edwards, writes: “It may well be that recent events have forced a Damascene conversion on the Fed and it now understands that its pandemic era monetary financing of fiscal deficits has been a major contributor to high inflation—despite its earlier protestations that it wouldn’t.”

Bottom line: The market is betting that a data-dependent Fed will ease in 2023 after lifting the fed-funds rate just to the mid-3% range, still well below all but the most optimistic inflation forecasts. That might stave off a deep recession, but result in a double-dip downturns, as in 1980 and 1981-82, at the beginning of the Fed’s successful war on inflation four decades ago.