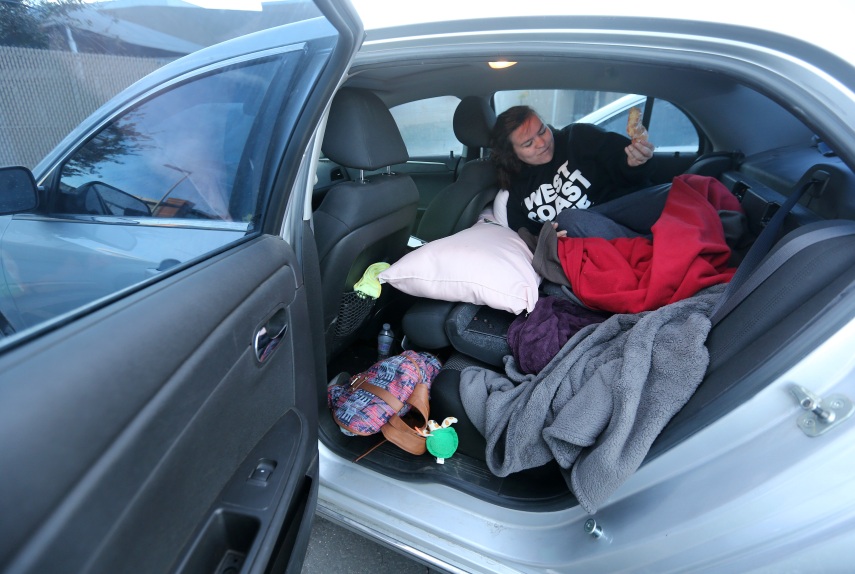 America’s community colleges and universities are struggling to address poverty and housing affordability among their student bodies, an extension of the nation’s housing crisis exacerbated by the pandemic. In a survey of 200,000 two- and four-year-old college students conducted in 2021, nearly half said they were homeless and 14% were homeless at some point. And a recent federal report found that housing costs make up a “significant portion of student debt.”

Long Beach City College’s new parking structure is more than a place for staff and students to stash their cars: The four-level garage right off Pacific Coast Highway, which opened in 2020, is also serving as an ad-hoc dormitory.

Underscoring the crushing realities of affordability, the Pacific Coast campus of Long Beach City College started an experimental safe parking program for housing insecure community students, who, bereft of other options, have turned to sleep in their vehicles. A recent survey found that, out of a student body of roughly 24,000, 3,000 are housing insecure, 1,000 are either homeless or couch surfing, and roughly 70 sleep in their cars. The parking program, which provides overnight security and access to power outlets and nearby restrooms, can accommodate 15.

Stay connected to the latest news. Get a 30-day free trial of WSJ | Bloomberg | FT | Barrons | The Economist | NYT

Interim superintendent president Michael Muñoz, who launched the program this fall as part of a wide-ranging effort during the pandemic to revamp how the school handles emergency aid, said the experiment in alternative shelter came out of a realization that the student housing problem is immediate, and help isn’t coming fast enough. The school is embarking on a $90 million plan to build affordable housing on a site five miles from campus, but that will take years to complete.

“In California, housing affordability is an issue that extends beyond community college,” Muñoz said. “Layer in the student aid model, which awards aid based on the total cost of attendance outside of the housing, and community college students get less because tuition is cheap. This was all exacerbated by Covid.”

According to a 2020 report from UCLA, 1 in 5 community college students, 1 in 10 California State University students, and 1 in 20 University of California students experienced homelessness that year. The state legislature earmarked half a billion dollars in the 2021-2022 budget to help address the persistent problem.

Muñoz knows firsthand how housing challenges can eat away at upward mobility. When he attended community college at East Los Angeles College and Fullerton College as a single parent, he recalls struggling with balancing work, parenting, and his studies. “Do I buy food or textbooks,” he said. “Which utilities can I live without?” When Muñoz later transferred to UC Irvine, which opened up additional aid opportunities, the change “made him feel like he won the lottery.”

“I made it through the system,” he said. “I feel guilty because a lot of my peers who couldn’t get through community college had the same life experiences I had. We’re losing students — human beings with hopes and dreams that are being derailed.”

His efforts to address student poverty and housing access, mirrored by successful programs at Florida Atlantic University and Amarillo College, show the challenge lower-income students face reconciling the potential of higher education with the reality of housing and tuition costs. According to the annual 2021 Hope Center RealCollege survey, 48% of the nearly 200,000 two- and four-year university students in the U.S. who responded to the survey were housing insecure and 14% were homeless at one point.

Muñoz’s experience is one side of the coin of college housing today, a system where significant inequality, supply and cost has created a bifurcated market.

For many students, the nostalgic stereotype of sharing a utilitarian dorm with a new roommate or splitting a cheap off-campus apartment is an unattainable scenario. On one hand, there are students like those Muñoz is trying to help, part of the vast wave of new entrants into higher education who are less financially secure and more diverse than students in past generations, and often entering community colleges as a first step. This is a more financially at-risk student population: More than 20% of undergraduate students are themselves, parents, for example. About 44% attend community colleges, often commuter campuses in urban areas that lack dormitories and are more affected by the national rise in rental costs, as well as a lack of affordable and reliable transportation.

But the existing aid system — geared towards that outdated vision of a well-heeled, middle-class 18-year-old hanging at the quad with plenty of parental support — hasn’t shifted to accommodate students who have to pay for housing and, per a Department of Housing and Urban Development report, find those costs to make up a “significant portion of student debt.”

On the other side of this student, housing divides is large state schools and private universities. Housing for those students is being built at a steady clip and has become a favored asset of many institutional investors. Private equity groups like Blackstone Inc., which paid $784 million for a 5,400-bed portfolio of student housing complexes in August, see housing as a low-risk, steady investment in today’s pandemic-era uncertainty, and have steered billions of dollars toward new units both on- and off-campus, often built by corporate developers like CA Ventures and Greystar. The schools themselves would often prefer to avoid tapping capital reserves or taking on debt.

Dave Borsos, a student housing lead at the National Multifamily Housing Council, said that after the sector saw better-than-expected performance during 2020 — students may have had to leave their dorms during Covid, but they preferred to walk across the street to student apartments instead of heading home — it’s viewed as a “resilient, strong-performing asset.” Bolstered by students, and their parents, a captive market who regularly pay bills, and increasing demand and appetite for luxurious units in walkable areas near campus, new student apartment complexes — some equipped with over-the-top amenities like lazy rivers, pet-washing stations, and climbing walls — have been steady sources of income. “Having gone through two major economic shocks, they have exceeded our expectations,” said Borsos.

Borsos expects that the experience of college during Covid means that many of the more frivolous student amenities will be replaced with study rooms and functional common spaces, but prime, walkable space near classes can still charge a premium.

The growth patterns mirror the nation’s housing at large, clustering on and near large, growing campuses, especially in urban areas. Borsos said markets like Atlanta and Phoenix and Sun Belt cities are seeing significant new student housing construction and plenty of demand. With Covid restrictions cutting the number of units delivered in 2021 to around 22,000 — half the recent average of about 40,000 — demand should increase further. It’s a consistent story of not enough or too much: For many historically black colleges and universities, which saw a jump in enrollment following 2020’s racial justice demonstrations, a growing student body has strained existing housing resources. In October, students at Howard University in Washington D.C. staged a month-long protest over poor conditions at campus dorms.

Meanwhile, enrollment at public two-year colleges fell 9.5% in 2020, according to the National Student Clearinghouse Research Center. And smaller, rural private schools, which also are fighting for students, face no new institutionally funded construction. Many now have surplus rooms.

“There are going to be haves and have nots,” said Borsos. “While enrollment is growing for larger schools, there are several thousand second-and third-tier schools that are struggling, with enrollment dropping and little financial support. The vast majority of investment has been at the big schools.”

In the last decade, there’s been a “once-in-a-generation shift” towards student housing as a vehicle of institutional investment, said James Costello, senior vice president of Real Capital Analytics. Investors have rotated out of retail and commercial assets in central business districts and focused on multifamily housing, industrial and student housing. So again, like the larger real estate market, capital is helping bolster a market that’s not providing housing solutions to all students.

“Once institutional money discovers a sector, it just builds on itself,” he said.

But colleges and universities that want to add more housing often come up against the same restrictions that have strangled other kinds of apartment construction: NIMBYism and restrictive zoning laws. This is particularly true in high-cost urban areas — especially in California, where efforts at UC Berkeley and UC Santa Barbara have been dashed by local pushback. One of the reasons UCSB was willing to pursue plans to build the now-infamous “Dormzilla” — an 11-story megastructure that would house nearly 5,000 undergrads in tiny, windowless units — was that it had been running out of options to meet the accommodation needs in its long-range development plan, and was betting the oversized building (funded in part by a gift from its billionaire designer, Berkshire Hathaway vice chairman Charlie Munger) could be a housing Hail, Mary.

Adding to the student housing supply could only get more difficult. Costello forecasts that construction will pullback in the next few years, as many campuses that interest investors will have hit an equilibrium when it comes to housing capacity, and performance will remain stable. Borsos went so far as to ask whether there’s enough supply to meet investor demand.

But without larger funding to help expand student housing at less profitable locations, and invest in affordable housing across the board, it’s hard to imagine how schools like Long Beach City College can overcome their housing challenges. Muñoz sees this as a failure to see the long-term benefits of such spending.

“I was the recipient of benefits and financial aid when I was a young, single father, and look at what I’m paying in taxes now,” he said. “There’s an ROI on lifting students out of poverty and lots of societal benefits. It’s good for California to make long-term investments in Californians.”