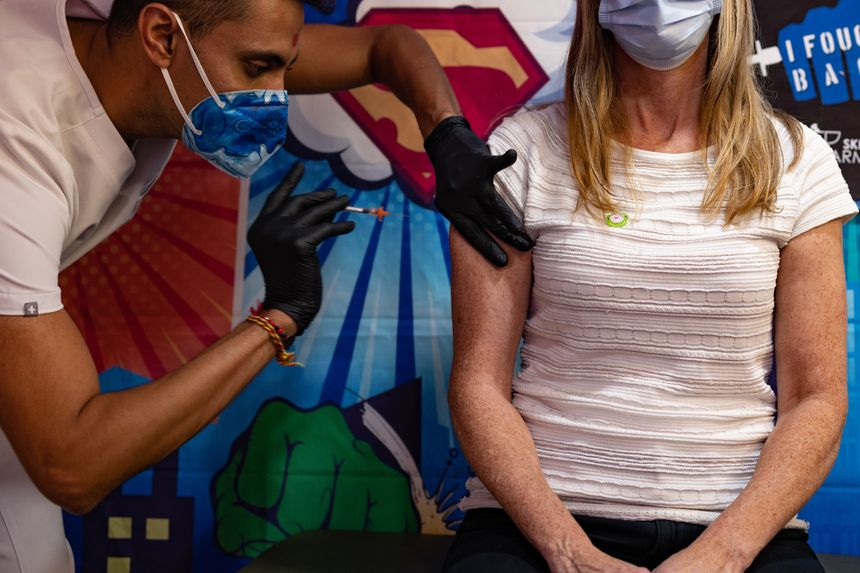 Some U.S. pharmacies and other vaccine providers are offering the new Covid-19 booster shot only from Pfizer Inc. and BioNTech SE, after a manufacturing-quality problem at a contract manufacturer caused a shortage of Moderna Inc.’s new booster shot.

A Moderna spokesman said the company anticipates resolving constraint issues in the coming days. “We are working closely with the U.S. government to deliver significant amounts of updated, bivalent booster doses as we continue to see high demand in certain areas of the country,” the spokesman said.

Some pharmacies and other vaccine sites have either canceled appointments or stopped scheduling new appointments for people seeking to get a Moderna booster shot. At CVS Health Corp., some pharmacies have used up all of their Moderna booster shots and continue to offer the Pfizer shot as they work to acquire more Moderna doses, a CVS spokeswoman said.

California-based health system Kaiser Permanente is urging people to get the Pfizer boosters if they would rather not wait for new supplies of Moderna’s shot, a spokesman said. The Lehigh Valley Health Network in Pennsylvania has stopped booking appointments for the Moderna booster as it awaits more doses, and it is offering the Pfizer vaccine, a spokesman said.

The Centers for Disease Control and Prevention has said that adults can get a new, updated booster shot from either Pfizer or Moderna, regardless of which vaccine they received for their original series.

The supply crunch for Moderna marks an early stumble in the U.S. campaign to roll out updated booster shots to tens of millions of people ahead of a potential surge in Covid-19 cases this fall and winter, as people spend more time indoors.

Some people who have tried to sign up online for appointments to get the Moderna booster shot are being told there are no time slots available, Dr. Plescia said. If people try again and select the Pfizer shot, they should be able to get appointments, he said.

Moderna, based in Cambridge, Mass., said the supply of its booster shot could improve within days, after the Food and Drug Administration this week cleared the release of about 10 million doses that had been held up over the production issue.

The company still expects to deliver 70 million doses of its updated booster shot by the end of this year, in accordance with the terms of a federal supply contract, the Moderna spokesman said.

New York-based Pfizer has shipped more than 21 million doses of its updated booster shot in the U.S., and it plans to provide more than 100 million by the end of November, a spokeswoman said.

About 4.4 million Americans have received an updated booster dose, according to the CDC, which is about 2% of those who completed a primary vaccination series.

Moderna’s shortage arose after the FDA in August conducted an inspection of a Catalent Inc. drug plant in Bloomington, Ind., which fills vials and packages Moderna’s vaccine for distribution.

The FDA inspectors found several potential violations of drug-manufacturing standards at the Catalent plant, according to an inspection document the FDA posted online this week. The inspectors said Catalent didn’t properly investigate findings of visible particles in certain products. The report posted online is partially redacted and didn’t make clear which products were affected.

A Catalent spokesman said the FDA found no issues related to the safety or efficacy of the Moderna booster batches. Production at the facility, including of Covid-19 vaccines, has continued without interruption. The company is taking steps to address the FDA inspection findings, the spokesman said.

As a result of the inspection, however, the FDA’s Aug. 31 authorization of Moderna’s new booster shot didn’t include millions of doses produced at the Catalent plant, and they weren’t distributed. Before this week, the only Moderna doses that were distributed were produced at a different facility.

Because of concerns about supply limitations, Moderna asked the FDA to review some of the batches of its new booster shot that were being held at the Catalent facility.

The FDA reviewed 10 batches—totaling about 10 million doses—and determined they were suitable for release, according to a Sept. 20 letter the FDA posted on its website. The FDA will consider authorizing the release of additional batches.

“This authorization was based on FDA’s determination that the batches met all applicable specifications, following a careful review of information provided by Moderna about the manufacture of these batches,” an FDA spokesman said. “The agency has no concerns with the safety, effectiveness or quality of these batches.”

Separately, Moderna said Friday it has asked the FDA to authorize the use of its updated booster shot in children ages 6 to 17. The company expects to complete a request for use of the booster in children 6 months through 5 years later this year.