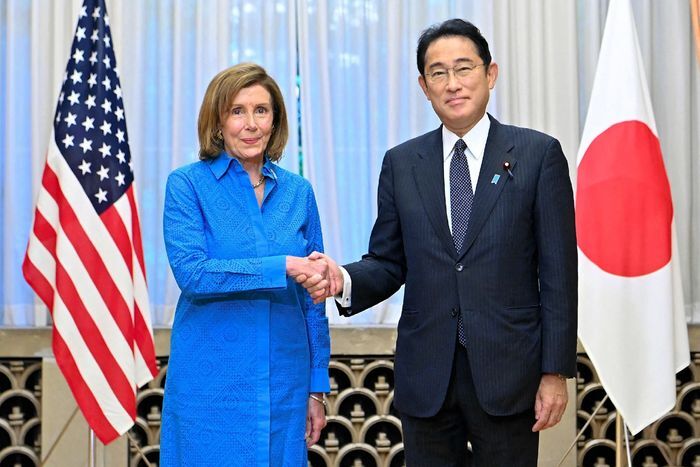 House Speaker Nancy Pelosi said Friday that the U.S. would continue engaging with Taiwan despite criticism from China, as Beijing encircled the island with rocket and ballistic-missile fire following her visit there.

“We will not allow them to isolate Taiwan,” Mrs. Pelosi said of Beijing.

Referring to China’s military drills, Mrs. Pelosi said that Beijing was “probably using our visit as an excuse.”

She rejected China’s criticism of her visit to Taiwan, saying: “They are not doing our travel schedule.” She called the visit a way to congratulate Taiwan for building a prosperous democracy.

“Taiwan is one of the freest countries in the world,” she said. Beijing claims the self-governing island as its own territory.

Mrs. Pelosi was speaking at a news conference in Tokyo after meeting Japanese Prime Minister Fumio Kishida for breakfast.

“The actions by the Chinese side will have serious consequences for the peace and stability of the region and the international community,” Mr. Kishida said. He said the U.S. and Japan should work closely together to respond to the Chinese drills.

China’s military exercises near Taiwan on Thursday tested the democratic island’s defenses with navy ships and war planes. The show of force disrupted commercial air and sea routes and raised concerns about further military escalation. Taiwan and the U.S. condemned China’s moves, with the White House announcing that the USS Ronald Reagan aircraft carrier and its accompanying ships would remain in the region “to monitor the situation.”

As part of the exercise, China fired a number of missiles around and over Taiwan. Five landed within Japan’s exclusive economic zone, the first time this has happened, Japan’s defense minister, Nobuo Kishi, said late Thursday.

“This is a grave problem affecting the safety of our people,” Mr. Kishi said. “I strongly protest.”

An exclusive economic zone is the area beyond a country’s territorial waters where the country claims special rights to explore for and use marine resources.