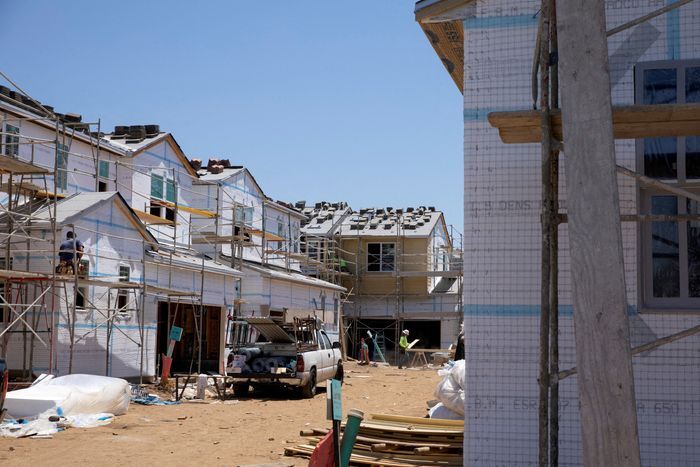 Steeper borrowing rates and high prices in the housing market are leading many buyers to give up. That is welcome news for owners of single-family rental homes.

Prospective home buyers face affordability issues that are likely to get worse before they get better. Existing-home sale prices reached a record median of $407,600 in May, while sales slid for the fourth consecutive month. Mortgage rates have nearly doubled since January, helping to boost the median mortgage payment for new loans by $513 a month, according to the Mortgage Bankers Association.

With this trend poised to continue—the Federal Reserve has signaled it will continue lifting short-term rates to combat inflation—single-family landlords say they are well-positioned as more would-be home buyers have little choice but to rent.

Rents for single-family homes rose 14% this April from a year ago, the 13th consecutive month in which rents grew at a record pace, according to housing data provider CoreLogic.

“The more the rates go up, the better it is for this business,” said Bruce McNeilage, chief executive of rental-house owner Kinloch Partners, at an industry conference last month.

A shortage of available existing homes was also a factor contributing to rent increases, according to CoreLogic. Home builders are also expected to pull back on how much they build with rates rising and more home buyers reluctant to pay up, analysts say.

Housing starts, a measure of U.S. home building, fell 14.4% in May from April, according to the Commerce Department. A separate measure of U.S. home-builder confidence, meanwhile, fell for the sixth straight month in June to its lowest level in two years, the National Association of Home Builders said.

By contrast, 74% of single-family landlords surveyed by John Burns Real Estate Consulting LLC this May said they expected to continue seeing strong or very strong leasing activity over the next two quarters. That response was down from a high of 91% during 2021 but still above where sentiment was before the pandemic.

Invitation Homes Inc., one of the largest rental homeowners by homes owned, said earlier this month that its rental rates have continued to grow at an even higher pace than last year through the first five months of 2022. Its homes are 98% occupied and resident turnover is at an all-time low, the company said.

“Demand today is getting stronger and stronger,” said David Singelyn, CEO of publicly traded American Homes 4 Rent, at the May industry conference.

Smaller operators, like Mr. McNeilage, say they are having similar success. “Because of the supply and demand, we are raising rent roughly 15%,” he said, “which is below our peers in many areas.”

Still, it isn’t all good news for these companies, and some challenges loom. Shares of the three publicly traded rental-house landlords—Invitation Homes, American Homes 4 Rent and Tricon Residential —have each fallen by more than 17% year to date, in line with declines in the broader stock market. Investors might be confusing the fate of single-family rental companies with the slowing for-sale housing market, some analysts say.

Most analysts also say that the current pace of rent growth isn’t sustainable. Renter finances are being pushed to their limits in more cities, according to a new report from Moody’s Analytics. Since late 2019, the percentage of U.S. metropolitan areas where the typical earner would have to spend more than 30% of their income on apartment rent has ballooned, rising to 23% from 8%, Moody’s found.

If rents are pushed too much higher, it could lead to people choosing to double-up in apartments and houses, leading to higher vacancy rates and potentially lower rent growth, said John Pawlowski, an analyst at real-estate analytics firm Green Street. Others note that if the economy falls into recession, that would also likely pressure rents.

But that isn’t happening so far. Trends such as remote work continue to drive demand for the extra space afforded by single-family homes. “Home values could very well go down, but I just don’t see rents moving all that much down,” Mr. Pawlowski said.