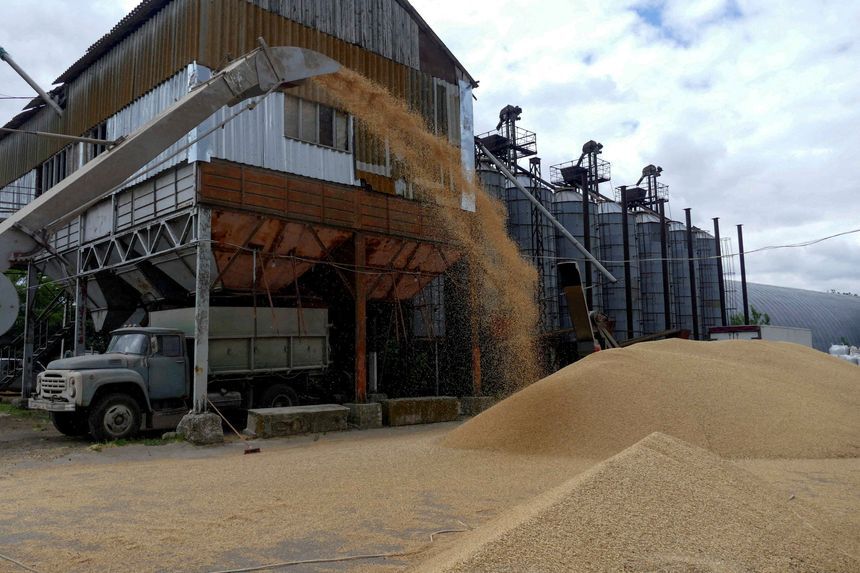 The deal between Moscow and Kyiv to allow for the export of Ukrainian grain is helping push global prices lower, but it won’t translate into a slug of new exports soon.

Wheat prices fell Friday, as the deal raised hopes that a restart to Ukrainian grain exports would ease a brewing global food-supply crisis. Wheat futures traded in Chicago were down more than 4% at $7.72 a bushel.

Having surged to a record high of $12.94 a bushel following Moscow’s invasion of Ukraine, prices have tumbled back to preinvasion levels in recent weeks, as concerns about the global economy have grown and the deal has looked increasingly likely. Other factors have softened prices, including the prospect of bumper crops in other big producers, such as Russia.

The deal promises to free up ports in and around Odessa and Mykolaiv, which are still held by Kyiv and are Ukraine’s main conduits for grain exports. While Russia has targeted Ukraine’s export infrastructure, bombing port warehouses and silos, the Odessa area hasn’t suffered the same damage, officials say.

Grain analysts expect that even with Friday’s deal, it could take weeks for Ukrainian ports to be cleared for safe navigation and for grain shipments to begin flowing again. And Russia and Ukraine must remain committed to the deal—not a foregone conclusion amid the vagaries of the ground war and the parallel economic war being waged between Moscow and the West.

It is also unclear how eager global shipping firms will be to load Ukrainian grain in the first place, despite assurances that both sides are committed to keeping ships and crews safe. Assuming exports do start to move out of ports affected by the deal, they will likely be at levels far below those before the war.

“Reaching an agreement is a positive first step, but many hurdles remain to overcome before the Ukrainian trade lanes can open up again,“ said Ulrik Uhrenfeldt Andersen, chief executive of Golden Ocean Group Ltd., a shipper that handles grain.

The deal comes just in time for many Ukrainian farmers, who have recently started harvesting. Alternative routes via neighboring countries such as Romania and Poland have much lower capacity than ports along the Black Sea.

Currently, Ukrainian agricultural products are sent by rail and truck out of the country across its borders with the European Union, and through barges down the Danube river to the port of Constanta in Romania. Capacity along these avenues has hovered at around a third of prewar exports. The biggest stumbling block: Ukraine has different-sized rails for its railroad system, requiring cars to be lifted from Ukrainian rails to EU-standard ones, or trucks to unload the grain and drive it onward. That has created bottlenecks.

On Thursday, a five-mile line of vehicles snaked out from one crossing into Poland. Truckers idled in the shade of trees as they waited for upward of a day to get through.

There will also be less grain to send out of the country. Ukraine yields this year are expected to be lower than normal because of the war, and the industry has a long list of problems that could prevent grain from getting to the ports in the first place.

Many farmers have yet to sell all their crops from last season, or received low prices for what they have sold. They are now racing to harvest as much as they can this year, while trying to finance the next agricultural season. Another problem is high fertilizer and fuel prices.

Farming infrastructure, including irrigation networks, is also shattered in some parts of the country and many farmers have had equipment stolen or destroyed by Russian forces.

Pressure has eased in other places. Ukraine’s recent recapture of Snake Island from Russia at the end of June opened the way for more grain to get out in smaller shipments ahead of Friday’s deal. The island sits close to the mouth of the Danube river and its recapture by Kyiv has made it safe for vessels loaded with grain to reach the Black Sea via channels in the river’s delta.

That has led to an uptick in ships arriving at Ukraine’s Danube river ports, according to data from MarineTraffic and Ukrainian officials.

Grain exports from Reni, one such riverine port, were more than double in the first three weeks of July versus the whole of July 2021, due to the influx of vessels, according to data from AgFlow. Still, the capacity of these river ports is small compared with the much larger facilities around Odessa and Mykolaiv that the deal promises to reopen.