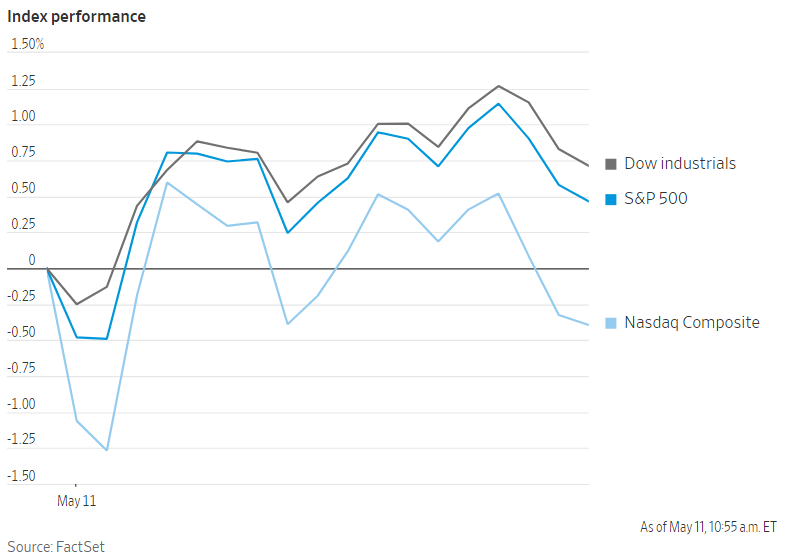 Stocks swung between gains and losses Wednesday after fresh data showed inflation eased slightly in April but not as much as economists expected.

The S&P 500 rose 0.7% in morning trading. The index snapped a three-day losing streak Tuesday, hitting pause on a stretch of pressure that came as investors braced for the Federal Reserve to keep raising interest rates to curb decades-high inflation.

The Dow Jones Industrial Average added 0.8%, while the technology-focused Nasdaq Composite was up 0.2%.

The yield on 10-year Treasury notes—which underpins borrowing costs throughout the economy—rose to 3.014% from 2.990% at Tuesday’s settlement. Earlier in the morning, yields had moved as high as 3.074% before retreating. Yields and bond prices move in opposite directions.

The consumer-price index increased 8.3% in April from the same month a year ago, decelerating from an 8.5% annual rate in March but above the 8.1% expected by economists. Lower annual inflation last month marks the first monthly easing of price increases since August 2021.

Investors hoping for a definitive sign that inflation is peaking may have been dismayed by the higher-than-expected reading, said Michael Farr, the chief executive and founder of Farr, Miller & Washington.

“The Band-Aid is still coming off slowly,” Mr. Farr said. “According to the Fed, we’re not near the end of this process that everyone wants over.

The trajectory of inflation and wages will determine how much the Fed will raise interest rates at its next policy meeting. The central bank last week lifted rates by half a percentage point, the biggest rise since 2000, and approved a plan to shrink its $9 trillion asset portfolio—kicking into a higher gear its campaign to rein in 40-year-high inflation.

“What we saw this morning was mostly in line with expectations—at least my expectations,” said David Kotok, the chief investment officer at Cumberland Advisors. Still, volatile markets have been primed to react strongly to any headline hinting at persistent price pressures. “We’re in those kinds of crazy times,” he said.

Stocks, particularly in the U.S., have been hit by a wave of selling in recent weeks. Investors are contending with the unwind of easy monetary policies that had boosted gains for stocks and bonds since the early days of the pandemic.

Adding to the uncertainty for investors are the war in Ukraine, which has propelled inflation even higher by boosting commodity prices, and Covid-19 lockdowns in China that threaten to hurt the global economy.

“If we only had rising policy rates, or only had high inflation, or only had China or only had Ukraine, we could probably manage that,” said Daniel Morris, chief market strategist at BNP Paribas Asset Management. “But we’ve got all that simultaneously. That’s why it’s such a particularly challenging environment.”

Mr. Morris said U.S. stocks could come under further pressure, saying valuations were down to average levels having been historically expensive before the selloff.

Shares of Coinbase Global slid 17% after the cryptocurrency exchange said its users declined from the previous quarter. Shares of Unity Software plunged 30% after the videogaming software developer widened its loss and gave second-quarter revenue guidance below analysts’ expectations.

Switch rose 8.3% after the computer-services company said it was being taken private by a consortium of investors.