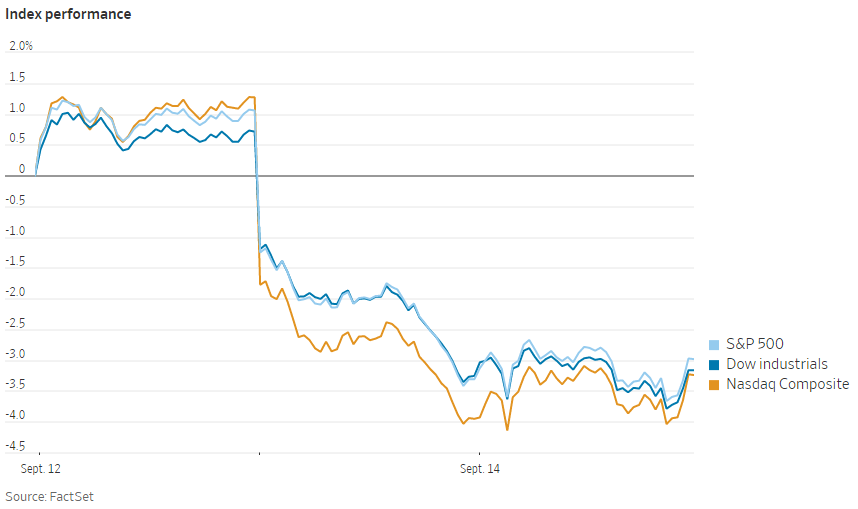 U.S. stocks inched higher Wednesday, recovering some losses from the previous day’s wild session that was spurred by a hotter-than-expected inflation report.

The latest consumer-price index report released Tuesday spurred volatile moves across asset classes as investors curbed hopes that the Federal Reserve might slow its aggressive pace of interest-rate increases. The August inflation reading showed core prices, which excludes energy and food figures, accelerated from a year earlier—indicating that broad inflationary pressures strengthened. That led traders on Tuesday to dump stocks across all sectors, sell bonds and cryptocurrencies, and push the U.S. dollar higher.

On Wednesday, data measuring U.S. suppliers’ prices also indicated elevated inflation. The producer-price index, which measures what suppliers are charging businesses and other customers, rose 8.7% in August from a year ago. On a monthly basis, the reading declined 0.1% from July, in line with economists’ expectations.

Some of Tuesday’s sharp market moves started to unwind Wednesday. The WSJ Dollar Index lost 0.3%, after notching its largest one-day jump since March 2020. Brent crude, which fell the day before, rose 1% to $94.10 a barrel.

Energy stocks rose broadly as Brent crude rebounded. The sector was the top-gaining segment of the S&P 500 on Wednesday.

Among the top individual gainers in the S&P 500, Moderna shares added $8.10, or 6.2%, to $139.40 after its chief executive told Reuters the company is open to supplying Covid vaccines to China.

Also making the index leaderboard, Starbucks rose $4.86, or 5.5%, to $92.70 after the coffee chain raised its longer-term financial outlook. The company now sees adjusted earnings-per-share growth over the next three years of 15% to 20%, up from its previous forecast of 10% to 12%.

Shares of railroad operators declined as a possible freight labor strike looms. The White House is assessing how other transportation providers could fill potential gaps in the nation’s freight network as labor unions and railroads continue contract talks. Union Pacific lost $8.34, or 3.7%, to $217.95, and CSX shares shed 33 cents, or 1%, to $31.23.

Few market watchers were willing to suggest that volatile market moves may be in the rear-view mirror—especially until the Fed’s next meeting.

The Fed will make its next interest-rate policy decision next week. Federal-funds futures, used by traders to bet on interest-rate moves, showed a 76% chance that the central bank will lift rates by 0.75 percentage point. The data also show traders are assigning a 24% probability that the Fed will increase interest rates by 1 percentage point, according to CME Group data.

The yield on the two-year U.S. Treasury note, which is sensitive to near-term rate expectations, climbed to 3.782%, from 3.754% on Tuesday. The 10-year Treasury yield eased slightly to 3.411% from 3.422%. Yields and bond prices move in opposite directions.

“The longer it takes for inflation to be tamed and for the Fed to back off on hiking rates, the lower the odds of the Fed being able to achieve a soft landing,” said Eric Sterner, chief investment officer of Apollon Wealth Management, referring to a scenario in which the central bank slows the economy enough to curb inflation, but avoids triggering a recession. “We still have more pain that we’re going to feel as investors and consumers over the next few months.”

Some investors and strategists said the market may have overreacted Tuesday, especially after Fed Chairman Jerome Powell already said last month in Jackson Hole that the central bank must continue raising interest rates until it is confident inflation is under control.