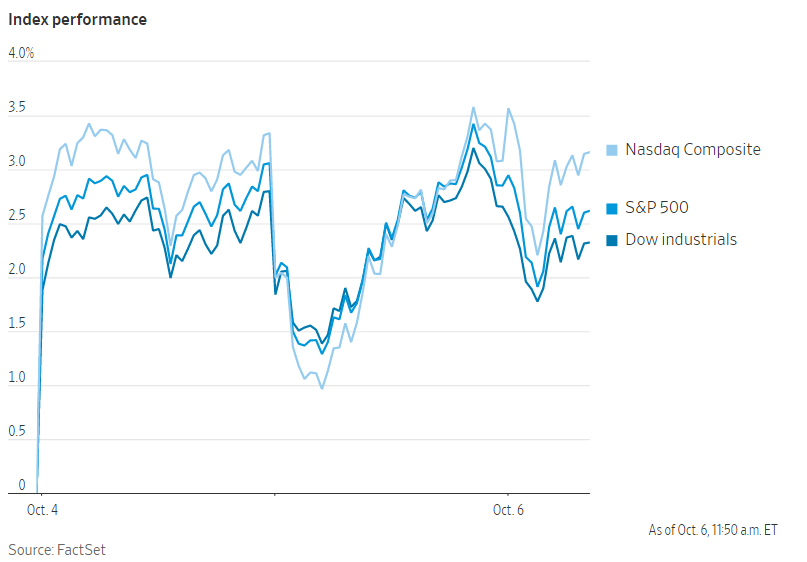 The S&P 500 soared a combined 5.7% on Monday and Tuesday—its best two-day percentage gain since April 2020. But Wednesday’s performance served as a reminder that rallies in 2022 have often been fleeting. October’s seesaws reflect investors’ attempts to wrestle with the U.S. economy’s uncertain path as it absorbs interest-rate hikes.

“This week has been a really good example of where market psychology is,” said Chris Zaccarelli, chief investment officer at Independent Advisor Alliance. “There are risks to the economy and corporate profits. The question is: Are enough of those challenges priced in?”

Investors this week have looked closely to data for clues about the path of the Federal Reserve’s interest-rate increases. At the start of the week, some traders contemplated the possibility that data showing weakness in the labor market and manufacturing sector could push the Fed to reconsider its rate-hiking trajectory—an idea that helped contribute to Monday and Tuesday’s rally, investors said.

But a series of strong data releases Wednesday, combined with hawkish comments by Fed officials, persuaded many that the central bank’s current path will likely be undeterred.

On Thursday morning, investors briefly cheered the release of initial jobless-claims data, which showed that claims rose to 219,000 for the week ended Oct. 1, more than the 203,000 that economists expected. Lately, investors have interpreted bad economic news as good news for markets, believing that economic weakness will force the Fed to slow its interest-rate increases.

Stock futures pared their losses immediately after the data’s release, but then turned lower again.

“There is a misconception that the Fed will make a pivot as soon as we see an economic deterioration,” said Florian Ielpo, head of macro at Lombard Odier Investment Managers. “The message for us is very simple: The slowdown is happening. It’s likely to be a recession. And equities need to start showing a better pricing of recession risk.”

Mr. Ielpo said he has been positioning more defensively across his flagship portfolio since August, but last week bumped the portfolio’s cash holding up to 75% amid the “joint collapse of bonds and equities.” That cash allocation, he said, is the highest since the heart of the Covid-19 crisis in 2020.

“I think it’s very hard to be optimistic for the quarter to come,” he said, adding that he believes that a slowdown in earnings is “barely priced in by the markets.” Earnings season will kick off in earnest next week, with reports due from companies including JPMorgan Chase.

Additionally, investors on Thursday said they were digesting the Wednesday agreement by the Organization of the Petroleum Exporting Countries and its Russia-led allies to slash output by two million barrels of oil a day⁠—a decision that officials fear could exacerbate inflation and slow economic growth. Oil prices swung. Brent crude futures rose 1% to $94.27. The U.S. equivalent, WTI, also added 1%.

Overseas, the pan-continental Stoxx Europe 600 dipped 0.6%. The British pound fell 0.4% against the dollar, extending a recent stretch of weakness. The WSJ Dollar Index, meanwhile, gained 0.5%, putting it on track for a second consecutive day of gains.