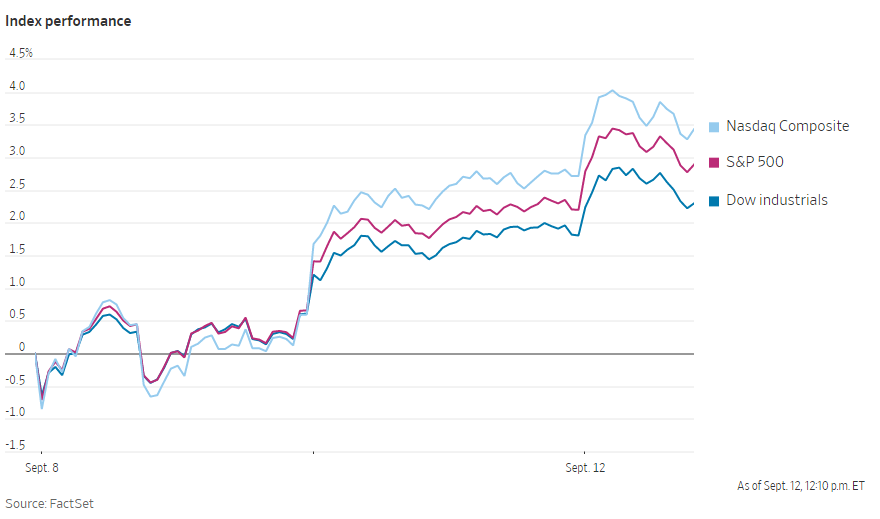 U.S. stocks rose Monday, ahead of key inflation data due later this week that is expected to show further cooling of consumer prices.

The S&P 500 gained 0.9%, putting the broad index on course for a fourth consecutive day of gains after it closed higher for the week on Friday. The Dow Jones Industrial Average added 0.8% while the technology-heavy Nasdaq Composite climbed 0.7%.

Indexes have charted a steady rise in recent sessions as concerns about large interest-rate hikes have been alleviated by signs of easing inflation and data that continues to point to a surprisingly robust economy. Tumbling commodity prices have lifted hopes that the worst of inflation has passed. Meanwhile, the labor market has remained a key source of economic strength. Gauges of business activity have been stronger than expected.

The data is expected to show August was the second month of cooling inflation pressures. The figures will help Federal Reserve officials gauge how far their fight against soaring prices has come and how much further they need to lift interest rates. Fed officials have an interest-rate meeting next week.

“If inflation moderates quicker than expected, I think the Fed can get more comfortable that their job might be closer to being done than they originally thought,” said Stephanie Lang, chief investment officer at Homrich Berg.

Inflation has likely peaked, she added, but markets are unlikely to push much higher until the Fed begins to moderate its tightening campaign. “What the market is pricing in right now is a soft landing, which I think is pretty optimistic,” she said.

Despite some signs of inflation decelerating, investors largely expect Fed officials to continue tightening for some months to be sure price pressures have abated. Many investors expect the Fed to raise interest rates by another 0.75-percentage point next week.

Walt Disney rose 1.1%. Activist investor Dan Loeb signaled Sunday he is backing off his push to persuade the company to spin off ESPN.

Twitter fell 1.4% after the company’s lawyers said Twitter intends to enforce its merger agreement with Elon Musk. Mr. Musk’s legal team on Friday cited a whistleblower payment as a new reason to drop the takeover.

Yields on U.S. government bonds weakened, with the yield on the benchmark 10-year Treasury note declining to 3.285% from 3.321% on Friday. Bond yields and prices move in opposite directions.

Overseas, European indexes rose across the board. The pan-continental Stoxx Europe 600 jumped 1.8% with gains largest for the index’s retailers, miners and auto companies.