The Democratic Bill to Fund Government and Suspend The Debt Ceiling Has Been Block by GOP Senators. 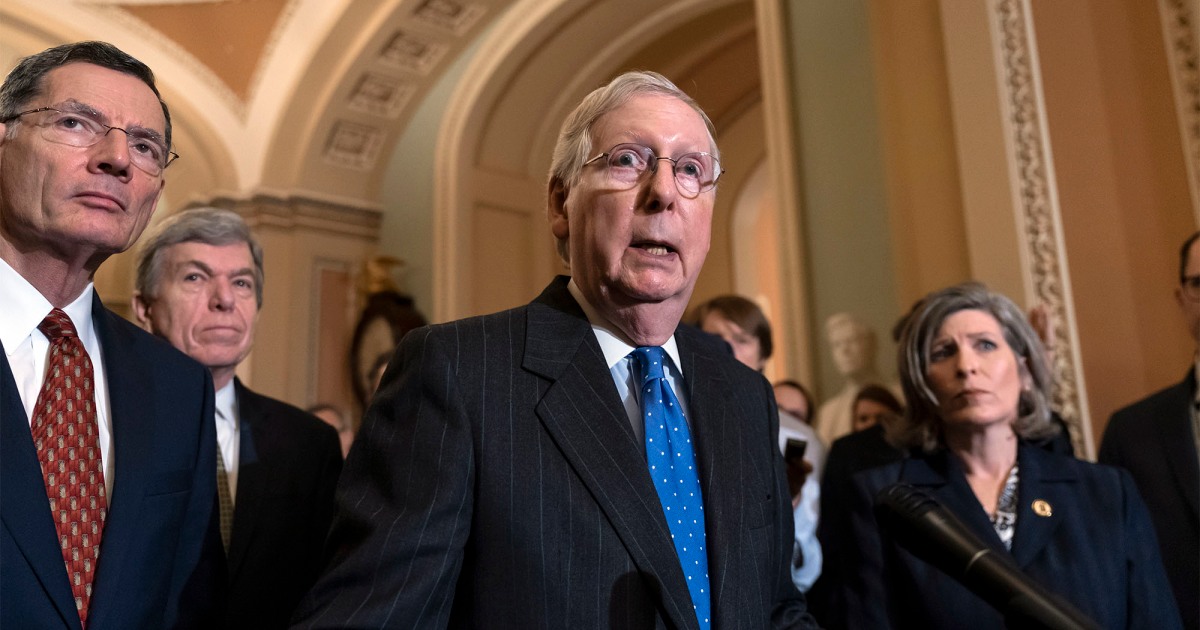 Senate Republicans blocked a Democratic bill that would both fund the government and raise the country’s borrowing limit, escalating a political showdown over the government’s finances just days before it runs out of money.

Senate Democrats sought to pass a House-approved stopgap measure that funds the government through Dec. 3, 2021, and suspends the debt limit through Dec. 16, 2022. They are racing to send the legislation to President Biden’s desk before the government’s current funding expires at 12:01 a.m. Oct. 1.

While lawmakers in both parties negotiated the short-term government funding, Republicans voted against Monday’s procedural motion in a bid to force Democrats to address the debt limit themselves. With 48 in favor and 50 opposed, the legislation fell short of the 60 votes required to advance in the evenly split chamber.

Treasury Secretary Janet Yellen has notified lawmakers that the government may be unable to keep paying its bills on time as early as next month if Congress doesn’t authorize additional borrowing.

The failure of the procedural vote Monday could prompt Democrats to decouple the short-term spending measure and the debt-limit vote. House Speaker Nancy Pelosi (D., Calif.) suggested last week that Democrats would do so, saying that Congress would pass a stopgap spending measure before the end of the month to keep the government funded.

Senate Republicans have almost unanimously lined up against voting to raise the debt ceiling, as a protest against Democrats’ agenda, including the $1.9 trillion coronavirus relief bill Democrats approved earlier this year and the broader $3.5 trillion education, child care, healthcare and climate bill they are now working on.

GOP lawmakers say that Democrats, as the party in power, should take care of the debt limit themselves. Democrats say that votes to raise the debt limit during the Republican Trump administration were bipartisan.

“Social Security checks, Medicare benefits, veteran’s benefits, small business, all this and more are now on the chopping block because Senate Republicans are playing games with the full faith and credit of the United States,” Senate Majority Leader Chuck Schumer (D., N.Y.) said. Mr. Schumer, who changed his vote to a no to preserve his ability to bring the bill back to the floor, said the Senate would continue work on the issues this week.

Mr. McConnell had attempted to bring up a government-funding patch without the debt limit, but Democrats in turn blocked that effort.

“Democrats control the entire government—the Senate, the House and the White House. They intend to sideline Republicans and go it alone to slam American families with historic tax hikes and borrowing,” Mr. McConnell said. “So they will need to raise the debt limit on a partisan basis as well.”

The impasse comes as Democrats also face a number of debates within their own party over the social policy and climate bill, including the amount of spending and the level of tax increases it should include. They are working to begin resolving those differences this week, hoping to open the door to House passage of a roughly $1 trillion bipartisan infrastructure bill. Progressives have said they would block that legislation until an ironclad agreement is secured on the social policy and climate bill.

Mrs. Pelosi said in a meeting Monday evening with House Democrats that she was moving ahead with a vote on the infrastructure bill on Thursday, saying that could no longer be contingent on passage of the social-policy and climate package. She said her approach had changed when she realized the overall spending and tax cuts would have to amount to less than $3.5 trillion, because of centrists’ concerns.

“I told all of you that we wouldn’t go on to the [infrastructure bill until] we had the reconciliation bill passed by the Senate. We were right on schedule to do all of that, until 10 days ago, a week ago, when I heard the news that this number had to come down,” Mrs. Pelosi told House Democrats Monday evening, according to someone familiar with her comments. “We had to accommodate the changes that were being necessitated. And we cannot be ready to say until the Senate passed the bill, we can’t do BIF,” she said, referring to the infrastructure bill.

Still, lawmakers said they were continuing negotiations on the broader budget bill with the hope of hammering out its general parameters and overall spending level this week.

“We need the entire reconciliation bill,” Rep. Pramila Jayapal (D., Wash.), chairwoman of the Congressional Progressive Caucus, told reporters Monday evening. “Some framework that can still take another several months to get done, that the Senate hasn’t agreed to, that hasn’t been voted on, is not going to do it for us.”

But other liberals said they would vote for the infrastructure bill, which is also expected to draw the support of roughly a dozen or more Republicans, according to lawmakers and aides.

On the debt ceiling, Democrats do have the power to raise the debt limit without Republican cooperation if they pursue a budget process called reconciliation. But doing so could be time-consuming, and Democrats have continued to push for Republicans to either support the measure or at least expedite the process for Democrats to do so along party lines.

A vote to raise the debt limit doesn’t authorize new spending, instead essentially allowing the Treasury Department to raise money to pay for expenses the government has already authorized. About two-thirds of federal spending is automatic on programs such as Medicare, Medicaid and Social Security, while the other third is discretionary and annually approved by Congress.

A default on the debt could have catastrophic financial consequences, and the pressure on both parties to resolve the issue will likely grow as Congress nears the deadline. Neither the Treasury Department nor outside organizations have settled on a specific date for when the government will exhaust its ability to pay its bills, with some outside experts estimating that the deadline will arrive in the second half of October or early November.