The One Place You Can Still Get a 3% Home Loan: Your Family 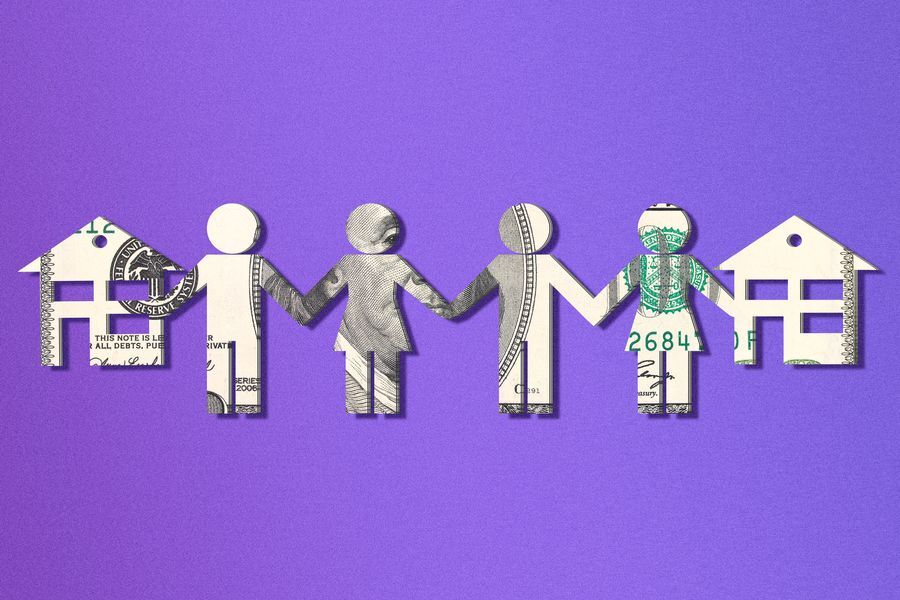 With average mortgage rates near 6% for a 30-year-loan, some lucky home buyers are snagging rates at half that. Their secret? They’re borrowing from family members instead of a bank.

Family help has typically come in the form of cash down payments, but now, rising commercial mortgage rates, soaring rents and sky-high home prices are prompting more people to turn to family to cover the mortgage as well, says Timothy Burke, chief executive officer of National Family Mortgage, which helps families set up private mortgages and track payments. These loans typically involve well-off parents lending money to adult children to get them into a first home, but grandparents also are lending money to grandkids, aunts and uncles to nieces and nephews, and siblings to each other, Mr. Burke says.

For those who can afford it, why not just give away the money? Some rich parents don’t want to give their adult children a handout and prefer that they take on a collateralized mortgage loan on favorable intrafamily terms, financial experts say. What’s more, giving large sums of money away can create tax complications.

The Internal Revenue Service has long set minimum interest rates for loans between family members as a way of preventing people from disguising gifts to heirs as loans that charged little or no interest. The IRS rate is updated monthly, and is tied to bond yields. It applies regardless of the borrower’s credit score, and it means children pay less in interest than they would with a commercial loan, while parents get more in interest than they could get from a savings account. For July, the rate for a loan with a term under three years is 2.37%, the rate for a three-to-nine year term is 2.99%, and the rate for loans of more than nine years is 3.22%. (For August the short-term rate is 2.88%, the mid-term rate is 3.15% and the long-term rate is 3.35%.)

“We’re busier than ever,” says Mr. Burke. He says his firm has closed more than $1 billion in intrafamily loans since 2010, with default rates of less than 1%. In most cases, there’s no bank financing, just parent financing. In some cases, the adult children get a commercial loan for part of the purchase price, plus a secondary family loan to make up the difference.

“The value proposition is about wealth preservation and wealth transfer. It’s about keeping money in the family,” says Mr. Burke.

Lots of families make informal loans, without a loan contract and without recording a mortgage. These undocumented, unsecured loans can cause tax and other problems if disagreements over terms arise. The IRS doesn’t track family loans, informal or formal, but can challenge their validity in an audit.

Mr. Burke says family loans often come into the picture when adult children, in their 20s or early 30s, have settled into a nice place to live, and have good jobs, but rents are high.

“That money is going down the drain. How can I help you turn that into equity?” Blaise Carrig, the 71-year-old retired chief operating officer and president of Vail Resorts Inc., remembers saying to each of his three children in turn.

Mr. Carrig and his wife, Leslie, a 65-year-old retired farrier, are serial lenders.

In March, they helped their youngest son, Colin, 31 and a host at the Blue Lion restaurant in Jackson Hole, Wyo., buy a $605,000 condo in the heart of town. He traded up from an $1,800 basement apartment with a roommate and a mold problem to a one-bedroom condo with reframed barn wood paneling and a 30-year mortgage at 2.14%—the March 2022 intrafamily minimum loan rate. His monthly housing outlay is $1,500 now, including taxes and a condo fee.

“We could have given them the money outright, but I feel like they should all have the normal responsibility of having a mortgage,” Mr. Carrig says, adding that it was important to work around what the kids could afford. “I wanted it to be real and I wanted it to also not to strap them,” he says. That meant providing equal down payments for all three, and in the case of his sons, taking a partial ownership stake in their homes.

“We got to pick our own adventure,” says Avery Carrig. “When I found this place, I loved every inch of it. The family mortgage gave me a competitive edge when the market was starting to get crazy. Sellers were looking for offers that were going to be a sure thing.”

Sounds complicated? The Carrig family set up the loans through National Family Mortgage, and a third-party service provider handles the paperwork, including collecting rent.

“You don’t have to call up your kid and say ‘Where’s your payment?’” Mr. Carrig says. The Carrigs, who live in Steamboat Springs, Colo., get one monthly deposit on the eighth of every month for $4,503 into their bank account. “We’re looking at it almost like an annuity on our side,” Mr. Carrig says.

If you think an intrafamily loan might work for your family, here are some pointers.

Start with a financial-planning checkup

Parents want to help their children, but there’s a danger that they might give more than they should, says H. Jude Boudreaux, a certified financial planner in New Orleans.

When a couple said they wanted to help their daughters, a teacher and a nurse practitioner, buy homes in the $500,000 range in Colorado, the first thing Mr. Boudreaux did was update their retirement plan, showing that even if they took the entire loan amounts out of their portfolio, their financial projections still worked. “You don’t want to imperil your retirement,” says Mr. Boudreaux.

Also, parents should consider where they’re taking the money from, along with the tax implications, and avoid possible penalties from pulling money from a retirement account, Mr. Boudreaux says.

If the loan is for $10,000 or more, the default IRS rule says the parents have to charge interest. A loan agreement should spell out the amount borrowed, the interest rate, and the term of the loan. It should also say what happens if the child doesn’t pay. That could be modifying the loan terms, taking ownership of the house, or pursuing foreclosure.

“The key thing is structuring the agreement properly and treating it as a bona fide loan,” says Greg Prokop, a certified financial planner in Edina, Minn., who recently helped a couple set up a loan to their daughter to buy a $2.5 million apartment in New York City. She used inherited funds from her uncle for a 20% down payment. The parents wired funds directly to the closing company. “The offer with a quick close set her apart,” he says.

Legitimizing the loan with paperwork and payments to show that it’s a true arms-length transaction keeps the IRS at bay, Mr. Prokop says. If it smells like a gift, the IRS can reclassify the loan as a gift and trigger a gift or estate-tax bill. Parents issue an IRS Form 1098 to the child each year showing how much interest they paid. And there’s a corresponding IRS Form 1099-INT that the parents must file with their tax return to report the interest they got as income.

Registering the loan as a mortgage on the property at the local government office provides more benefits. The children can claim a mortgage-interest deduction for up to $750,000 of debt if they itemize deductions on their federal tax return. Also, where a child and a new spouse are the borrowers, an intrafamily loan can act as a sort of divorce insurance, says Mr. Burke. If a gift was made, there’s no recourse for the family to get the money back. With a mortgage, they have a lien on the real estate.

Gifting the down payment

Parents can use a combination of gifts and loans. For 2022, an individual can give up to $16,000 to any number of people, using what’s known as the annual gift-tax exclusion. If you give more than $16,000 to anyone in 2022, you have to file a gift tax return, IRS Form 709. Spouses can split gifts, meaning a couple could give each child $32,000—and another $32,000 to each child’s partner. Any gifts above that amount count against the individual exclusion from gift or estate tax—$12.06 million for 2022, so no tax is due unless gifts exceed that amount.

What if your child can’t make a payment? In future years, parents might make additional gifts of cash, keeping under the annual gift tax exclusion threshold, to help boost their child’s assets. Or parents might defer payments to the end of the loan.

Parents can eventually forgive the loan, and it becomes a gift, says Mr. Prokop. Any amount forgiven above the $16,000 threshold counts against each parent’s lifetime gift and estate-tax exclusion amount of $12.06 million. If the IRS interest rates go down, the children can refinance with their family, just like they would with a commercial loan. Some advisersrefinance at every opportunity, and others say there’s a risk the IRS could treat the interest savings as a taxable gift at the time of refinancing.

Most parents try to dole out money and loans to their children equally. The Carrigs made equal down payments to their three children, for example, and have finessed their estate plans to make sure the financial benefits from the loans will even out.

There are some instances where parents have a reason to loan money to one child and not to another. In the case of one family Mr. Boudreaux advised last year, the parents made a loan to help a daughter buy a $350,000 house in St. Louis, Mo. She was struggling on a teacher’s salary to raise two children.

“It was a way to help her out and still get a better return on their cash than they were getting,” Mr. Boudreaux says.

The other daughter, who works in technology, was well off and said she didn’t need help. Discussing it can fend off later animosity. “Talking about it is so much better than not talking about it,” he says.