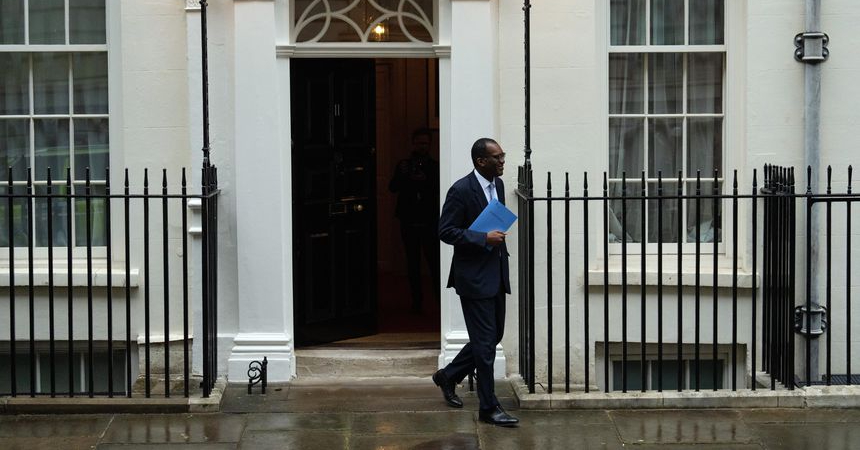 It’s tempting to see the market backlash against the British government’s proposed income-tax cut as a uniquely British problem.

That would be a mistake. The markets are sending a deeper message: It’s a more dangerous world for deficits.

Before the pandemic, depressed private investment and demand kept inflation too low for central banks that targeted 2%. In that world, government deficits helped by putting upward pressure on inflation. This also tended to push up interest rates, not a bad thing when central banks worried more about rates being stuck at zero. The upshot was that, as far as markets were concerned, governments’ capacity to borrow was infinite.

That world is over. Inflation in many countries is too high, and structural forces threaten to keep it there. Having belatedly realized this, central banks are raising rates at the fastest pace in nearly 40 years.

Elected leaders, though, are still stuck in prepandemic times. They acknowledge inflation is a problem but continue to borrow as if limits don’t exist. After the stimulus-inflated levels of 2020 and 2021, budget deficits fell sharply across developed markets this year, to an average 4.3% of gross domestic product, according to independent economist Phil Suttle. He estimates that will rise to 6.1% next year and 6.9% in 2024.

The reaction to British Prime Minister Liz Truss’ package at first blush seems excessive. More of the intended borrowing in the coming year is to subsidize energy prices, not cut taxes. As a share of GDP, it’s in line with what other European governments are borrowing to defray energy costs in the coming year.

Markets, however, were more forgiving of those plans for several reasons. First, by lowering headline energy prices, subsidies make it less likely high inflation becomes embedded in the public’s thinking and is thus sustained.

Second, they were seen as necessary, and temporary. By contrast, Ms. Truss’ proposed tax cuts are a political choice. They are intended to be permanent and to reduce deficits by boosting growth yet come with no analysis of how. “It’s not so much that the package is large, but that the government doesn’t seem to mind—and at times seems to welcome the controversy of a strategy that rebels against orthodoxy,” J.P. Morgan wrote in a note to clients.

The 6% fall in the pound and a half-percentage point rise in government-bond yields since Chancellor of the Exchequer Kwasi Kwarteng unveiled the proposals Friday has some comparing Britain to an emerging market. The analogy doesn’t work. In the Latin American and Asian crises of the 1980s and 1990s, falling currencies alongside rising rates reflected fear of devaluation, default and hyperinflation. None apply to Britain: it borrows in its own, floating currency, so devaluation or default aren’t an issue. It has a credible, independent central bank, and market expectations of future inflation have gone down since Friday, not up.

Rather, bond yields have shot up on expectations the Bank of England will raise rates more in response to the package, while investors (including foreigners) will have to buy a lot more British debt. Mr. Suttle estimates private investors will need to buy £225 billion, equivalent to $240 billion, of debt to finance the budget deficit next year and £80 billion being sold by the Bank of England as it unwinds the bond buying of previous years, in total equal to a staggering 12.2% of British GDP. (On Wednesday the Bank of England reversed course and said it would buy bonds to stabilize markets.) Mr. Suttle warns of a vicious circle: “As markets demand higher bond yields as compensation for greater supply and greater risk…so deficits will widen and net financing needs rise further.”

Britain’s situation is bad, but not unique. Italy, one of the world’s most heavily indebted governments, has seen its bond yields shoot higher this year, even though incoming right-wing Prime Minister Giorgia Meloni has promised fiscal rectitude. In part that’s because the European Central Bank is no longer backstopping member governments by purchasing additional debt.

But the country that resembles the U.K. most closely is the U.S. While the reserve status of the dollar and Treasury debt insulates the U.S. from some of the pressures buffeting Britain, its fiscal policy is just as miscalibrated. While President Biden touts the Inflation Reduction Act, which lowers deficits by $240 billion over a decade, he has also signed into law increased spending on veterans benefits, infrastructure and semiconductors, while taking executive actions that vastly expand food stamp and Obamacare benefits and cancel student debt worth $400 billion to $1 trillion.

Adding that to last year’s stimulus and associated interest, the Committee for a Responsible Federal Budget estimates Mr. Biden will increase deficits by $4.8 trillion, or 1.6% of GDP over a decade—comparable to the amount by which Ms. Truss is boosting the British deficit. The relaxed attitude toward debt is shaped in part by Mr. Biden’s economists’ assumption that real interest rates—the nominal rate minus inflation—will remain around zero for the coming decade. Federal debt is much more manageable when real rates are lower than the economic growth rate. They have some justification: Real rates were well below the economy’s growth rate for the decade before the pandemic.

On the other hand, massive deficits, Fed tightening in response to flare-ups of inflation and diminished private saving could all elevate real rates in coming years—as occurred after then-Fed chairman Paul Volcker crushed inflation in the early 1980s. Here’s one troubling sign: The real yield on five-year inflation-indexed Treasury bonds now stands at 1.8%, the highest since 2008. That’s about equal to the U.S.’s expected long-term growth rate.