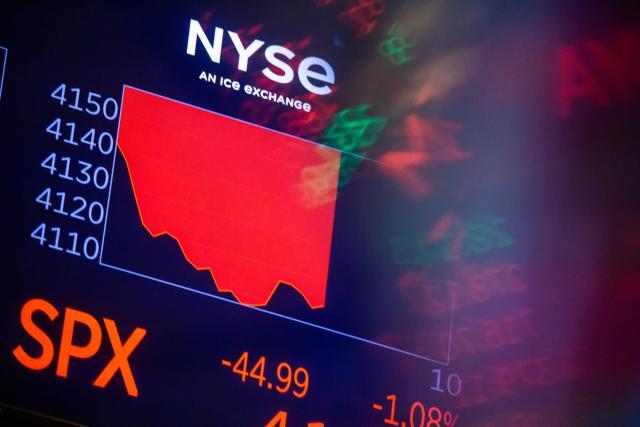 “Sell everything but the dollar” is resounding across trading desks as investors reprice the risk that the Federal Reserve hikes interest rates more aggressively than previously thought.

A global wipeout sparked by faster-than-forecast US inflation gathered pace on Monday amid a dramatic shift in bets on the pace of increases. Traders now see the Fed jacking up borrowing costs by 175 basis points by its September decision, which would mean at least one 75 basis-point move. More aggressive tightening is also seen at the European Central Bank.

In bond markets, a closely-watched part of the US yield curve inverted on concern that stronger rate hikes will lead to an economic slowdown. German two-year debt — the most sensitive to changes in policy — rose above 1% for the first time in more than a decade. Benchmark Italian bond yields increased to their highest level since 2014.

The repricing is being driven by data that showed price growth in the world’s biggest economy accelerated to a fresh 40-year high and consumer sentiment hit a record low. The news has dashed hopes that US inflation has peaked and undermined any hopes that the Fed would take its foot off the tightening pedal.

“The problem for risk assets is that it’s in a conundrum. We’ve got the choice between two bad choices” of stronger inflation or weaker growth, said Max Kettner, chief multi-asset strategist at HSBC. “The big change from Friday — that narrow path of goldilocks, that soft landing path — has become ever more unlikely.”

With supersized hikes on the agenda, Europe’s Stoxx 600 Index tumbled 2.3% to its lowest since early March, with tech stocks among the most hit. Nasdaq 100 contracts slid as much as 3.5%.

An exception to the wave of US-related selling was the dollar — the biggest beneficiary of safe haven demand from Tokyo to New York. The Bloomberg Dollar Spot Index rose for a fourth day, nearing its 2022 high.

In a note Monday, Morgan Stanley strategists said depressed consumer sentiment is a key threat to the US stock market and economy, and “the Equity Risk Premium does not reflect the risks to growth, which are increasing due to margin pressure and weaker demand as the consumer decides to hunker down.”

Meanwhile, Goldman Sachs Group Inc. strategists led by David J. Kostin said that US corporate earnings estimates are still too high and expect them to be revised downwards even further.

“Against this backdrop it’s hard to make the case for anything but a return to the lows we saw last month for the S&P 500 and the Nasdaq 100, and the prospect of further weakness,” said Michael Hewson, chief market analyst at CMC Markets UK. “In the space of a few days, markets have gone from optimism that inflation might be on the cusp of plateauing, to rising apprehension that we could not only see higher prices, but that prices might well remain higher for a lot longer than originally thought.”

Meanwhile, the US dollar climbed against almost every major peer on Monday, with the Norwegian krone and Australian dollar among the biggest losers against the greenback.

“The dollar has assumed the role of the global stagflation hedge with USD cash being one of the few financial assets offering returns,” George Saravelos, Deutsche Bank’s global head of currency research in London, wrote in a note.