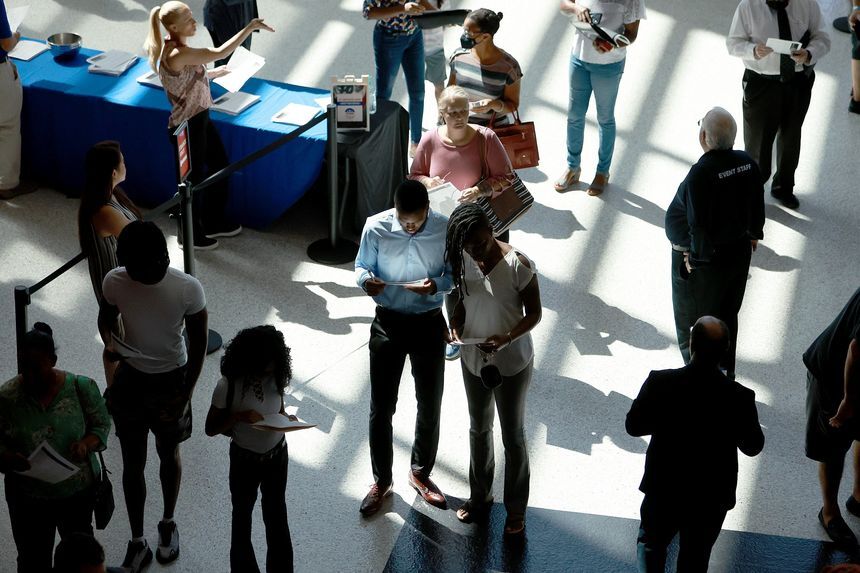 Despite strength in labor market, broader economy has been weakening in response to high inflation and rising interest rates

Employers continued to snap up workers in June—though at a slower pace than earlier in the year—in an economy that is otherwise cooling rapidly under the weight of high inflation and rising interest rates.

The U.S. economy added 372,000 jobs in June, the Labor Department said Friday. Hiring gains last month held near the previous three months, when companies added an average of nearly 400,000 workers, but slipped from higher totals early in the year.

“The labor market is cooling from a red-hot pace, but it’s far from going into a freeze,” said Sarah House, senior economist at Wells Fargo. “It’s hard to get a broad retrenchment in activity when you have 372,000 more individuals receiving paychecks.”

Ms. House expects hiring will continue, particularly in services sectors like leisure and hospitality, where demand for vacations and restaurant outings remains strong.

The unemployment rate last month, at 3.6%, was a touch above the half-century low reached before the pandemic hit in early 2020. The jobless rate has held at that level for four consecutive months, a sign worker shortages are easing slightly.

Average hourly earnings grew 5.1% in June from a year earlier, a step down from earlier levels. Still, the strong jobs report could keep the Federal Reserve on track to raise interest rates by 0.75 percentage point at its July meeting.

U.S. stocks slipped on Friday following the strong jobs report but finished the week with gains. The yield on the benchmark 10-year Treasury rose.

Employers hired across industries, with the government the only major category to shed jobs in June. Hiring continued in industries vulnerable to interest-rate increases and shifting consumer habits. For instance, construction firms, susceptible to a faltering housing market and higher mortgage rates, added jobs last month. Transportation and warehousing companies hired workers despite a spring pullback of consumer spending on goods.

Job growth continued, although fewer people were looking for work. The number of people in the labor force fell by 353,000 in June. The labor-force participation rate—or the share of adults working or seeking a job—ticked down to 62.2% in June from 62.3% a month earlier. Participation dropped broadly last month, with declines among women, men, workers in their prime ages of 25 to 54 and baby boomers.

“The labor market is a bright spot in the recovery,” said Daniel Zhao, senior economist at Glassdoor. “We are continuing to see a strong job market despite concerns about a recession elsewhere in the economy.”

Consumers are starting to pull back on spending partly because of inflation, which is running at a four-decade high. Home construction is slowing as the Federal Reserve attempts to pull down inflation through aggressive interest-rate increases. Manufacturing production is declining as Americans are reluctant to buy big-ticket items and household goods.

Some economists think the U.S. is already in a recession. Others believe it is likely to slip into one in the next year. Gross domestic product fell at a 1.6% annual rate in the first quarter. A Federal Reserve Bank of Atlanta model closely watched on Wall Street estimates that economic output contracted again in the second quarter, at a 1.2% annual rate.

Payrolls by Sector, change since February 2020

Many economists expect job growth will slow but say it isn’t clear whether companies will broadly cut jobs as economic output weakens, which is the typical recessionary dynamic. With too few workers for all the available jobs, companies have been reluctant to let go of the workers they have. Jobless claims, a proxy for layoffs, have ticked up in recent months but remain historically low.

Though employment in many industries has recovered beyond February 2020 levels, it remains well below prepandemic levels in leisure and hospitality. Companies in the sector—which includes restaurants and hotels—are trying to find and keep workers after an acute labor shortage followed steep cutbacks at the beginning of the pandemic.

Household expenditures and prices, change from a year earlier

More workers are starting to apply for jobs at Lobster Place Inc., which includes a seafood counter, full-service seafood restaurant and sushi bar in Manhattan’s Chelsea Market. Still, hiring new candidates requires constant recruiting and follow-ups, said Ian MacGregor, the company’s chief executive. Retention is particularly challenging, he said, adding that many recent hires haven’t stayed on for 90 days before they quit or are let go.

Lobster Place has raised wages to attract and retain workers. For instance, a cook makes $23 an hour, up from about $17 to $20 before the pandemic. Higher pay and benefits—such as expanded paid time off and medical benefits—have done little to ease the staffing shortages, Mr. MacGregor said. The four-person executive team is often serving food and drinks, rather than planning a new restaurant, because the company has struggled to hire junior managers.

More customers are eager to dine at Lobster Place as New York City tourism picks up, he said. “And we would love to open a new restaurant, but our biggest friction point for that is labor,” Mr. MacGregor said.

Lobster Place now charges $23 for a lobster roll, up from $18.50 in January 2020. So far, customers have been willing to go along with higher menu prices. Mr. MacGregor said he is concerned about how long that tolerance will last.

“I just have to believe that the money that people have saved over the last two years is going to run out,” he said. “At some point customers will push back and say, ‘Look, I can’t pay $25 for a sandwich anymore, even in New York City.’”

Many companies have cited a pickup in demand for their goods and services as a key reason for their labor needs. That demand is softening as inflation weighs on consumers, spurring many to shift spending habits.

When 32-year-old Jeffrey Miyamoto and his wife noticed how expensive it was to heat their home and dine out, they decided they needed to review their budget earlier this year.

The couple were surprised to see how much they were paying for streaming services and cut out Peacock, Amazon Prime and HBO Max. They only pay for Netflix now. They also stopped using food-delivery services such as DoorDash and Uber Eats, Mr. Miyamoto said.

Mr. Miyamoto, an investment analyst at an asset-management company, said he plans to take fewer international trips this year, including to parts of Asia, where he and his wife have family. “Our families are all far-flung around the world,” he said. “It’s been difficult to cut travel.”

The Woodbridge, Conn., resident has gone to the movie theater more than usual in recent months to see films including “Jurassic World: Dominion,” “Top Gun: Maverick” and “Death on the Nile.” Going to the movies, as well as hiking, camping and tennis, is cheaper than travel, he said.