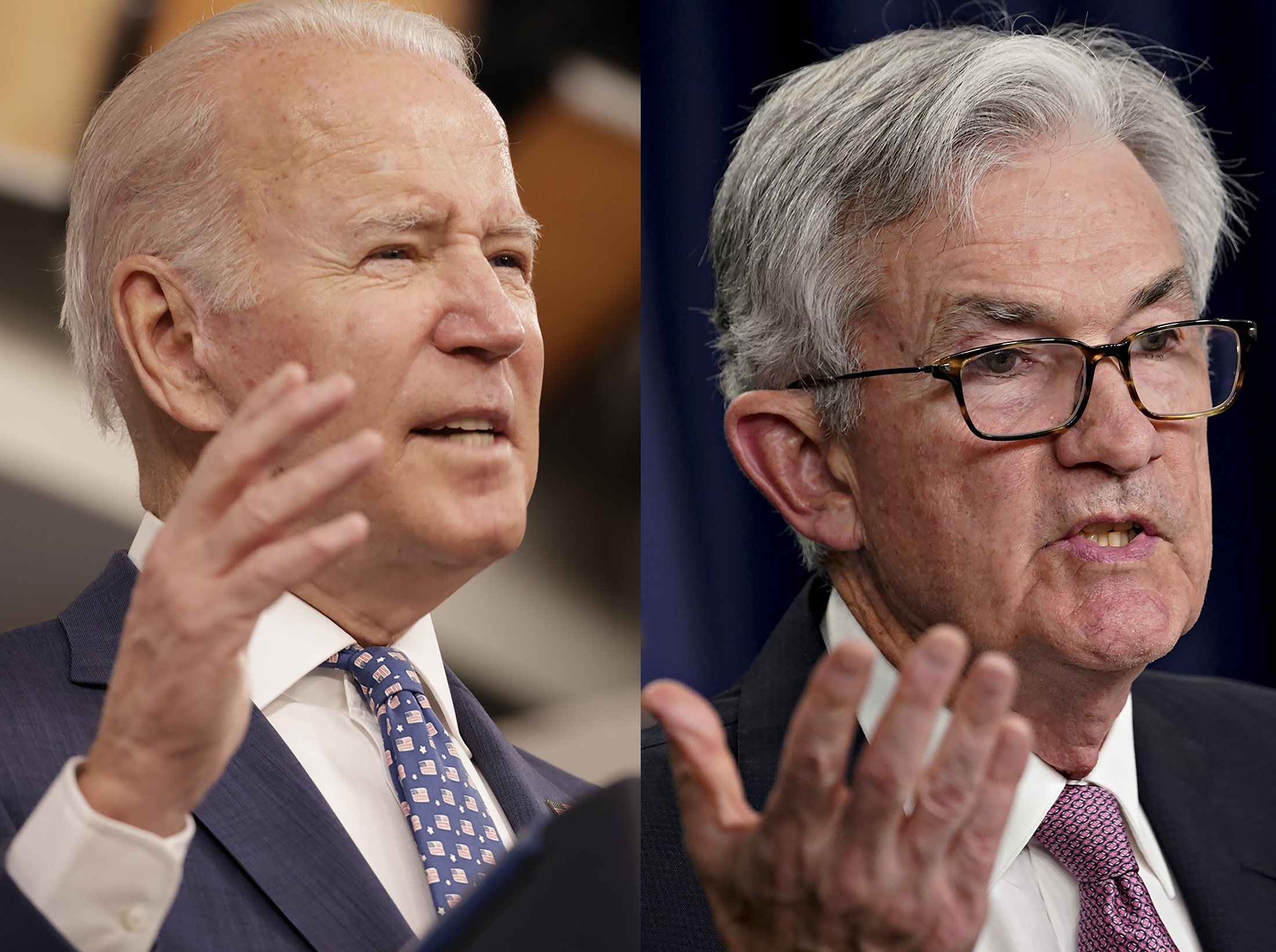 Soaring prices are hurting Americans. The cure is going to hurt, too. It may take a recession to stamp out inflation — and it’s likely to happen on President Joe Biden’s watch.

A downturn by the start of 2024, barely even on the radar just a few months ago, is now close to a three-in-four probability, according to the latest estimates by Bloomberg Economics.

On Wednesday the Fed delivered its biggest interest-rate hike in almost three decades, as it takes the fight against inflation into overdrive. When central bankers try this hard to slow the economy down, they often end up tipping it into outright reverse.

Investors are rushing to bet on that kind of bad outcome, sending stocks and bonds plunging. American households, watching their retirement funds dwindle as their grocery and utility bills soar, say they feel gloomier about the economy than at any time in more than four decades.

All of this, it’s worth pointing out, is happening at a time when US consumers are still flush with cash and jobless rates are near historic lows. Fed Chair Jerome Powell said Wednesday there’s “no sign” of a broader slowdown. The Fed’s own projections, and others highlighted by the administration, suggest a recession remains unlikely, showing how different economic models can produce a wide range of outcomes.

Still, the mood has turned sour at an alarming pace — putting Biden at risk of joining an unenvied club. From Jimmy Carter to George H.W. Bush to Donald Trump, one-term US presidents of the past half-century all had their re-election hopes fatally injured by the lingering effects of a recession.

That prospect is already causing turmoil in the Biden camp, ahead of crucial midterm elections in November when his Democrats must defend thin majorities in Congress — or risk losing what ability they have to get legislation passed, including measures to lift the economy if it slumps.

Voters are telling Democratic pollsters they see economic storms brewing. Key decisions on issues like student loans are paralyzed by inflation fears, according to one person familiar with White House deliberations. The administration is casting around for outside-the box fixes to show they’re fighting for hard-pressed households, from a windfall tax on oil profits to commitments by retailers to cut prices if China tariffs are removed. And its economists are laying out arguments for why the soaring cost of living isn’t Biden’s fault — and the economy is much better than voters seem to think it is.

Illustrating what an uphill task that is right now, two key gauges came out last week at levels little short of disastrous from a White House perspective.

Inflation unexpectedly spiked higher — triggering another leg of the stock-market rout, and pushing the Fed into an even more hawkish stance. And sentiment among US consumers (also known as voters) plunged to the lowest level in records going back to 1978, a period that encompasses three of the worst slumps in American history.

Rising prices are already primed to be this year’s top election issue. Sparked by the pandemic supply-chain crunch and massive fiscal stimulus, and given new impetus by the energy shock that followed Russia’s invasion of Ukraine, inflation has reached levels that most Americans haven’t seen in their lifetimes.

Add up the inflation and unemployment rates and you get a measure that economists call the Misery Index. That gauge is now elevated by historical standards — higher, in fact, than it was in several post-World War II recessions.

Bloomberg Economics projections suggest Americans will still be pretty miserable come midterm election day. The economy might not be in recession by then — that’s only a one-in-four likelihood — but for many voters it will feel that way.

It’s Not a Recession, It’s Worse

Celinda Lake, one of Biden’s top pollsters during the 2020 election, says her focus groups are awash with talk of the rising cost of gas and housing — and how wages aren’t keeping up. Lately, concern about the sliding value of 401k retirement funds has been surfacing, too.

“We ask, ‘If the economy were the weather, how would you describe it?’” says Lake, president of Lake Research Partners. “Voters have been describing storms and thunderstorms.”

The S&P 500 stock index is down about 20% from January’s peak, and the average mortgage rate has almost doubled since then — climbing close to 6%, the highest since 2008.

Those market moves are driven by the Fed’s pivot. They illustrate how, long before the central bank’s new policy can achieve much in the way of cooling off prices, it’s already denting wealth and adding to financial costs for ordinary Americans.

At the Biden White House, officials say the US economy is likely still strong enough to avoid a recession. They point out that high inflation is a worldwide problem, largely driven by the pandemic and war.

Still, worries about inflation are impinging on policy discussions over questions like whether to forgive student loans or remove Trump-era tariffs on China — and delaying decisions that have been pending for months, according to one person familiar with the discussions. Biden aides are loath to make any move that either contributes to inflation or hands the Republicans a talking point about the economy, the person said.

After last week’s nasty surprise on prices, two of the administration’s top economists — Cecilia Rouse and Brian Deese — emphasized that it’s the Fed’s job to be inflation-fighter-in-chief. But the Biden camp is looking at other ways of cooling prices, too.

A key Biden ally in the Senate this week proposed a new federal tax on oil-industry profits. The White House has been asking big retailers to commit to cutting their prices if the president lowers some China tariffs, and pushing them for details on how quickly that might happen, according to people familiar with the matter. “This is typical outreach to understand how a potential policy decision could affect stakeholders,’’ a White House official said.

The effort has been unsuccessful so far, with businesses citing a lack of understanding of what’s driving inflation, the people said. Biden’s team has been seeking to pin at least some of the blame for inflation on corporate greed, though few economists buy the idea.

The administration’s own economic talking points center on a rebound from the Covid slump that’s been impressive by the standards of recent US history — and much stronger than America’s global peers have managed.

“We have seen this incredibly robust, incredibly record-breaking fast recovery in jobs and in family incomes,” says Heather Boushey, a member of Biden’s Council of Economic Advisers.

“We knew it would be a sprint to get out of this pandemic recession, we needed to pull everything out really quickly,” Boushey says. “Now we need to level off into that sort of more marathon pace. We can’t keep sprinting forever. That’s not the way the economy works.”

The Republican line is that Biden and his team share the blame for soaring prices, because they pumped another $1.9 trillion of stimulus into the economy in March 2021 when it was already recovering.

“They put money into everybody’s pockets but they didn’t do anything in terms of supply-chain issues,” says David Winston, a GOP pollster and strategist who helps craft economic messaging for Republican leadership in Congress. “When you increase demand but you don’t figure out how to increase supply at the same time, you get inflation.”

The GOP needs to develop concrete proposals of its own for fixing inflation, something Biden hasn’t managed to come up with, Winston says. “The challenge for everybody is not just to constantly tell people how bad it is, but what are you going to do about it?”

White House officials acknowledge that a series of shocks including omicron, new Chinese lockdowns and the war in Ukraine have hampered the supply-side recovery and given new impetus to inflation just when it was expected to subside — and that another one could imperil the chances of avoiding recession.

The administration’s economists have modeled extreme scenarios — from a new coronavirus variant to an even bigger spike in oil prices — so that they’re prepared to act fast in case of emergency, a senior White House official said.

They’re also spinning a more upbeat story about the economy. High savings for households, fat profits for businesses, and low costs to service debt are not hallmarks of an impending downturn, another senior official said, citing private forecasts that put the chance of recession somewhere between 25% and 35%.

Above all, the Biden team’s economic pitch to voters is highlighting the abundance of US jobs. At 3.6%, the unemployment rate is near half-century lows — just a couple of years after more than 20 million Americans were thrown out of work in a matter of weeks when Covid hit. There are almost two job openings for every unemployed worker, close to a record ratio, and that’s helped lower-paid Americans in particular to bargain up their wages.

To be sure, elections are about much more than economics. Many analysts reckon that Bill Clinton’s famous internal campaign slogan from 1992 — “It’s the economy, stupid” — overstates the case nowadays.

From abortion rights and gun control to the personality of Donald Trump, there are plenty of other hot-button issues that engage and divide Americans, and will shape how they vote.

What’s more, even if the economy does fall into a downturn, there’s time for it to bounce back — and pull Biden’s ratings with it — before the presidential vote in 2024.

If a recession is inevitable, it’s best for Biden that it happens early, says Christopher Wlezien, a political economist at the University of Texas. “The sooner it comes, the better,” he says. “A worsening 2023 is probably going to weigh on the president in 2024. A recession arriving in 2024 will be even worse.”

Even the kind of high readings posted on the economic Misery Index this year haven’t always spelled electoral doom. Bloomberg Economics’ projections show that by November the measure will be roughly where it was exactly a decade earlier, when Barack Obama was comfortably re-elected as president.

But there’s one key difference. Back then, unemployment was the main cause of misery — and now it’s inflation. That’s a much worse mix for an incumbent government, according to Nobel Prize-winning economist Robert Shiller.

“People think they probably won’t be unemployed,’’ says Shiller. “Inflation affects everyone. Every time they go to the store they see inflation and it makes them angry.’’ And their reaction, he says, is: “Let’s blame somebody.’’