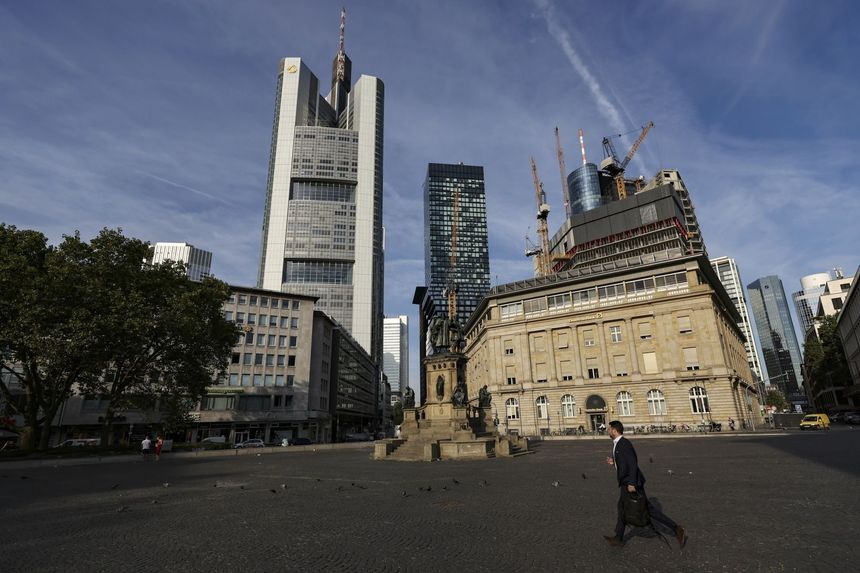 The global economy outside the U.S. is stuttering, knocked off course by soaring inflation, an energy crisis and now Russia’s nuclear war threats.

Business surveys published on Friday indicate that economic activity in Europe declined sharply in September, raising the risk of recession in one of the world’s industrial powerhouses as governments grapple with surging prices and disruptions from Moscow’s attack on Ukraine.

With Asian economies also struggling with rising interest rates and weakening exports, this leaves the U.S. as the only large economy showing a degree of resilience despite the Federal Reserve’s repeated interest-rate rises.

For the wider eurozone, S&P Global’s composite purchasing managers index fell to 48.2 in September, a 20-month low, with a reading below 50 indicating a contraction. The reading—based on the survey of manufacturers and service providers—suggests a deepening economic downturn that is likely to gather further momentum in coming months, the data firm said.

The latest data weighed on markets, sending the euro 0.8% lower against the dollar to $0.97, a fresh 20-year low. Stocks in Europe have taken the brunt of being on the front lines of the economic war with Russia. Germany’s DAX index has fallen by nearly a quarter this year, including a 2% slide on Friday, to its lowest level since late 2020. Oil prices slid to their lowest since January, before Russia invaded Ukraine.

Around the world, trade volumes are sputtering and inflation is crushing household and business confidence. China’s housing market is cracking while Europe’s energy crisis is hammering factory output. The U.K.’s unveiling of the country’s biggest tax cuts since the early 1970s, a measure designed to kick-start growth, caused a slide in the pound and a big jump in government bond yields, underscoring the narrow options governments face as they try to combat a toxic mix of low growth and high inflation.

Russian President Vladimir Putin this week threatened nuclear strikes and ordered reservists to mobilize after his troops suffered stinging setbacks in Ukraine, suggesting Europe’s most significant conflict since World War II could either drag on or escalate dramatically.

Central banks, led by the Federal Reserve, are prioritizing the fight against inflation, increasing interest rates at a pace not seen in decades. The dollar is soaring against other currencies, aggravating imported inflation elsewhere and putting pressure on emerging markets that have borrowed in dollars.

“It’s a bit of an experiment, how fast and hard you can [raise interest rates] without destroying the real economy,” said Jens Magnusson, chief economist at SEB, a Sweden-based bank.

For now, some supply bottlenecks are easing and unemployment remains low across advanced economies. Households in these countries have dipped into savings amassed during the pandemic, with their spending increasing by an annual rate of 2.4% in the six months through June, according to analysts at JPMorgan Chase & Co. Global employment also rose at more than twice its prepandemic pace during the period, the analysts said.

In the U.S., consumer spending remains robust and some manufacturers are shifting production from overseas, boosting investment. Still, the housing market, often a leading indicator of economic weakness, is softening as mortgage rates soar. Federal Reserve officials on Wednesday lowered their median expectations for economic growth from 1.7% to 0.2% this year.

Cooling U.S. inflation will likely require somewhat higher unemployment and a sustained period of lower growth, Fed Chairman Jerome Powell said on Wednesday. “We will keep at it until we are confident the job is done,” Mr. Powell said.

In the eurozone, retail sales declined in recent weeks as consumer sentiment hit the lowest level since records began in 1985. The region’s industrial output shrank by 2.4% in July from a year earlier as runaway energy costs strangled manufacturers. Deutsche Bank reckons the region’s economy could shrink by 2.2% next year, led by a 3.5% contraction in Germany.

Germany’s economy, the EU’s largest, is deteriorating at a rate not seen outside of the pandemic since the 2008 global financial crisis, said Mr. Williamson of S&P Global. The pullback in economic activity in the country, which is highly reliant on manufacturing and one of the most exposed in Europe to the gas crisis, was particularly dramatic, S&P Global said.

“The German economy looks set to contract in the third quarter, and…the prospects for the fourth quarter are not looking good either,” said Phil Smith, a director at S&P Global. Friday’s surveys showed a deepening decline in German business activity in September, led by the service sector, which has seen demand weaken rapidly as customers pull back on spending due to tightening budgets and heightened uncertainty about the outlook.

More than half of German retailers see their economic existence threatened by energy costs, according to a survey this week by the German Retail Association, a trade group. In Germany’s large auto sector, one in 10 companies have cut production because of high energy costs and another third are considering doing so, according to a survey this month by the German Association of the Automotive Industry. Nearly a quarter want to shift investments abroad.

“The situation, especially for medium-sized companies in the automotive industry, is becoming increasingly dramatic,” said Hildegard Müller, the association’s president.

Kion Group AG, a German forklift manufacturer, warned this month that incoming orders would be significantly below last year’s level in the three months through September, and predicted a loss of between €100 million and €140 million, equivalent to $98 million to $138 million.

In the U.K., retailer John Lewis & Partners this month reported a loss of £99 million, or about $111 million, for the first half of its trading year, and warned that customers are cutting back on the amount they spend.

Still, analysts are increasingly optimistic that the region will have enough gas for the winter, provided the weather isn’t too cold. The region’s governments have spent over €500 billion to support households and businesses through the energy crisis, according to calculations by Bruegel, a Brussels think tank.

Across Asia, export growth is weakening in the region’s major trading economies, a sign of tumbling demand for electronics as Western appetite for consumer goods fades.

“There really are signs now that things are starting to turn,” said Alex Holmes, senior Asia economist at Oxford Economics in Singapore.

South Korea, a bellwether of global trade, this week reported an 8.7% annual decline in exports during the first 20 days of September, led by cars and telecommunications equipment. Annual growth in semiconductor exports recovered after falling in August, data showed, but remains well below the gains seen earlier in the year.

Samsung Electronics Co., the world’s largest chip maker by revenue, said this month that it expected a sharp downturn in chip sales to extend into 2023. The semiconductor industry has been hit by a slump in sales of personal computers, smartphones and data servers worldwide.

“The second half of this year looks bad, and as of now, next year doesn’t really seem to show a clear momentum for much improvement,” Kyung Kye-hyun, who heads Samsung’s semiconductors unit and serves as the company’s co-CEO, told reporters earlier this month.

“Compared to the previous year, we have received fewer orders in the second half of this year,” said Nina Lin, sales manager of Tombo Toys Co., a Guangdong-based toy maker that mainly exports to the U.S., Eastern Europe and South America.

Chinese export growth in August slowed to an annual 7.1%, compared with 18% growth a month earlier. Exports to the European Union grew by an annual 11.1% in August, roughly half the rate in July, while shipments to the U.S. contracted by an annual 3.8%, data from China’s customs authority showed.

Like their counterparts in the U.S. and Europe, most central banks in Asia are raising interest rates. Central banks in the Philippines, Taiwan and Indonesia raised borrowing costs on Thursday, citing inflationary pressures.

The big exceptions are China and Japan, the world’s number two and three economies, which are less pressured by inflation and battling soft growth. The Bank of Japan held its policy settings steady Thursday, signaling it doesn’t think Japan is climbing out of the deflationary trap it has been mired in for years.

Recent data showed China’s slowdown moderated in August, benefiting from infrastructure investment that offset feeble consumer spending and a further decline in house prices. Covid-19 flare-ups in cities including Beijing and Shenzhen haven’t led to sustained lockdowns, though a handful of smaller cities are under tight restrictions.

Still, economists at Goldman Sachs Group Inc. this week cut their forecast for Chinese growth next year, to 4.5% from 5.3% previously, saying they expect China won’t significantly alter its Covid-19 strategy until the second quarter, delaying an expected economic bounce from a full reopening. They expect growth of only 3% this year.

“The global economy is in the emergency room,” said Jerome Haegeli, group chief economist at reinsurer Swiss Re and a former official at Switzerland’s central bank. “Anything like a soft landing is wishful thinking.”